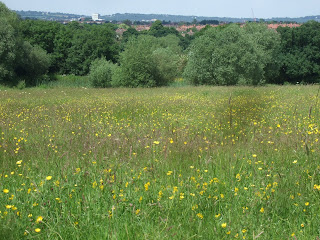 Following the campaign by Barn Hill Conservation Group, Brent School Without Walls and others, Sustrans has announced that it will not propose a cycle route through Fryent Country Park/Barn Hill.

In a letter to Barn Hill Conservation Group, Sustrans say they have received a 'great many' responses regarding the proposal and that 'many respondents have clearly stated that they do not want the greenway network to run through Fryent Country Park and Barn Hill. We will suggest alternatives.'

Sustrans also say that they never proposed a hard surface path through the Park and reaffirm their commitment to biodiversity.

Opponents of the scheme were not hostile to cycling but thought that the unique character of the Park and its designation as a nature reserve and site of metropolitan importance for biodiversity meant it should be protected. They will await the final report to see what alternatives Sustrans proposes before relaxing their vigilance.
Posted by Martin Francis at 16:13:00

I grew up in Wembley and am very glad to see Green activists there. I lived near Ealing Road and later Preston Road.

Im glad Sustrans have acted to protect Freyent Park, im also a member of Suntrans and have built some paths with them. They showed the greatest concern for the environment at that time.