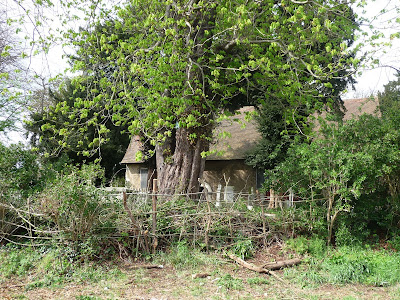 The churchyard at Old St.Andrew's Church, Kingsbury has been undergoing a big clear-up recently. The work is being done under the Community Payback scheme where offenders do six hours a day unpaid work, rather than serving a prison sentence. Serious offenders are not eligible and most of those serving a community sentence have been found guilt of theft, traffic offences or public order offences. The scheme was recently in the news over proposals to make offenders wear high-visibility vests while at work. The scheme is run jointly by the Probation Service, Safer Neighbourhood Teams and the Local Authority.
St Andrew's Old Church dates from the 11th century and it is thought there has been a church on the site since Saxon times. It is Brent's only Grade 1 listed building and has suffered from vandalism. The church is owned by the Churches Conservation Trust but the graveyard is the responsibility of the Parochial Church Council of Kingsbury who have worked hard at clearing the churchyard in recent years.
Today in the Spring sunshine, paths had been cleared and there were masses of violets amongst the graves. The workers are constructing a hurdle type fence around the graveyard constructed from the trees and shrubs they have cut down. They explained that they hoped the ubiquitous ivy would climb over the hurdles and form a solid barrier. It was clear that the work had been done with sensitivity and perhaps even a little enthusiasm - surely better than languishing in a cell.