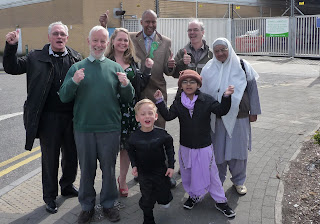 Following a two year campaign ASDA has made changes to the access road to its Wembley depot that means lorries will no longer block the pedestrian road crossing. Brent Greens wrote to police, Brent Transportation Unit, local councillors and the ASDA CEO; gained publicity in local papers through letters and demonstrations and put photographic evidence of the danger on the party's website and YouTube channel. They put their case to the manager of the Wembley ASDA at a meeting in December 2008 and were promised action.
A new gate (see photograph) was finally completed on Sunday 5 April, with the specific intention of allowing pedestrians safe passage.
Shahrar Ali, Green Party candidate for the European Parliament and Brent Green Party spokesperson for environment and planning welcomed ASDA's action: "We are delighted that ASDA has finally taken action to remedy the dangerous parking of lorries outside their loading bay, which until today presented pedestrians with a serious obstacle to the safe crossing of a slip road. It is notable that no other official body that we impressed upon, from the council officials to the highway police, were instrumental in getting the result the pedestrians and other road users were demanding."
An ASDA spokeswoman told the Willesden and Brent Times, "We are pleased to say now that this problem has been brought to our attention, it has now been resolved and we apologise for any inconvenience this may have caused customers or local residents."
Posted by Martin Francis at 16:20:00