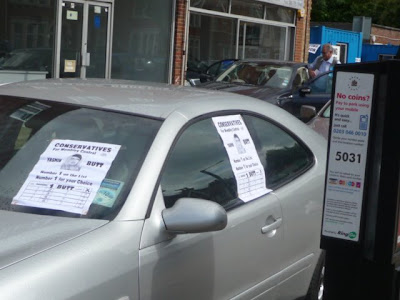 The 'Tory Car' parked outside Ealing Road Library polling station
The many expressions of support on the street and the doorstep for our Green campaign in the Wembley Central by-election failed to be translated into actual votes at the polling booth and we came fifth in the poll.

During polling day supporters of the other parties had predicted we would do well and one said that their canvassers had indicated that when people said they were voting Green this support was firm and positive, rather than a protest vote.

We will be reflecting on lessons to be learnt over the next few days but it seems clear that many people saw this election as a fight between the three main parties, and especially between the Lib Dems and Labour. Although there was a low poll of 30%, almost one fifth of the votes cast were postal votes.

The Lib Dem campaign was intensive in terms of both person power and the amount of literature produced. I lost count of the number of leaflets they produced and these were supplemented by two personally addressed letters to each household. The first was delivered in a business type envelope and was a letter of support for the Lib Dem candidate from Sarah Teather MP. The second was a photocopied, apparently hand-written, letter from the candidate on pale blue paper delivered in a matching pale blue hand-addressed envelope.

Their actual literature was almost 'policy free' and concentrated on attacks on Labour with particular emphasis on Gordon Brown, local Labour MP's second homes and the threat of higher council taxes under Labour. Amazingly they were relatively untainted by the scandal of the jailing of their former Lib Dem colleague which gave rise to the vacancy. This was helped by the fact that the Lib Dem group ejected him when the charges of fraud were first raised and he subsequently sat as an Independent. It is interesting that the public seemed more tolerant of fraud against a private company than misuse of taxpayers' money by MPs. Although some voters complained to me that they they were fed up with receiving a Lib Dem leaflet every other day the sheer volume of material ensure a high profile for the Lib Dems and they were successful in getting posters displayed in many homes and gardens giving the impression of wide support.

The Labour campaign seemed to have fewer people involved and circulated less literature. One Lib Dem remarked that the party did not seem very committed to the campaign but that certainly wasn't true of their candidate who was keen and enthusiastic. An early Labour leaflet which included a mock-up of ex-Lib Dem councillor Vijay Shah behind bars, and listed other Lib Dem councillors who had resigned for various reasons, was rejected as distasteful by some voters. Labour leaflets accused the Lib Dems of reneging on their promise not to increase Council Tax.

The Conservatives were very active on polling day itself. They produced glossy full colour leaflets which had vague promises about 'improving Wembley' but were strong, as befits a family that employs 100 local drivers in their car firm, on the rights of motorists but also highlighted congestion on Ealing Road.

The garrulous Independent, who had previously stood for Motorists and Residents, used his long-established local contacts well and ran a populist campaign against tower blocks and council tax increases and for a shopping centre and the handing back of the Copland playing field to local people.

Our campaign focused on positive policies on climate change, housing, work, schools and consultation and eschewed attacks on the other parties. The ward is not 'natural' Green territory, which was brought home to be when I had to squeeze between several gas guzzlers park in paved over front garden to deliver leaflets, but I thought that the social justice aspects of our policies would resonate with voters in some economically disadvantaged areas of the ward. Unfortunately, living as they do in short-term privately rented accommodation, they were less likely to be registered voters. Although we have a solid campaigning record in Wembley this has concentrated on aspects of the Wembley Masterplan and the Wembley Academy which are both outside the ward.

POLLING DAY ISSUES
There was camaraderie amongst tellers from the various parties and campaigns at polling stations in the face of public disenchantment with politics and absolutely horrible weather. However some issues did arise about a car festooned with Tory posters parked strategically outside Ealing Road Library and concern that some voters felt pressurised as they approached the polling portacabins. The latter was resolved by agreement that voters would only be approached for their polling card numbers after they had voted.

It would be helpful if guidelines were agreed about proper conduct of tellers and candidates at pollings stations and their environs and circulated and publicised before polling day to all involved. This would avoid any misunderstandings.