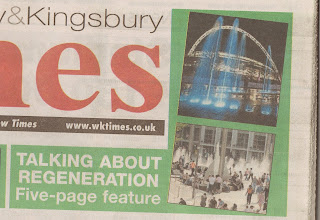 Some of you may have seen the five page Wembley Regeneration Special in the Willesden and Brent Times. The 'Special' reminded me of the old Soviet Weekly which used to extol the shining achievements of the regime, complete with impressive pictures and the words of the Great Leader.
In this case the words of the Great Leader are those of Cllr. Paul Lorber with contributions from the Quintain and St. Modwen developers all under the imprint of Brent Council, The Big Lunch and the Times. The headlines give a flavour: THE REGENERATION GAME, BOLD VISION FOR FUTURE (The Wembley Masterplan), SCORING GOALS FOR RESIDENTS AS DEVELOPMENT SPREADS WINGS (Wembley Masterplan), A NEW LANDMARK EVERYONE CAN BE PROUD OF (proposed Civic Centre), ACTION STATIONS AT WEMBLEY CENTRAL (the St.Modwen development at Central Square). Anyone reading this would not realise that every one of these developments has been contested by residents, the Green Party and in the case of the Wembley Masterplan, the Labour Party.
Publication in the middle of the Wembley by-election, when these issues are being hotly debated, is questionable to say the least.
The Willesden and Brent Times stable has always had my respect for being fiercely independent of the council. It is unclear whether this is 'paid for content' and thus not under the paper's editorial control or actually reflects the paper's views.
However, it is clear that we need to look again at the plans for Wembley High Road in the light of the recession, the changes in the Copland proposals following the dropping of plans for a tower block, and the impact of the Civic Centre.
Many Brent council buildings will be replaced by the Civic Centre including Elizabeth House, Brent House, Brent House Annex, Mahatma Gandhi House and Chesterfield House. There is already much vacant office accommodation to let in Wembley High Road and nearby streets, including Lanmor House, Dorland House, 390-400 High Road, Valliant House and some of Madison House. Empty office accommodation, like Unisys House at Stonebridge, will lead to neglect and dereliction with an adverse effect on the High Road.
We need to re-open consultation on the future of the High Road and its vicinity and address the controversial issue of high rise developments in the area. Future plans should have the support and consent of local people and actually improve the area in which they live.
The above is based on a 'Soapbox' I gave at Wembley Area Consultative Forum on July 21st.
Posted by Martin Francis at 15:29:00