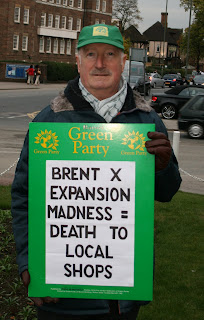 The Brent Cross Coalition appears to have Barnet Council on the run as the Planning Committee was once again postponed last night.  Now the Council intend to hold a two evening planning meeting on the 18th and 19th November at Hendon Town Hall.

The terrier-like Coalition continued to bite at the Council's heels by rejecting this proposal as giving two helpings of inadequate consultation rather than one. Instead they demanded a full public inquiry where all interested parties could listen to lay and expert evidence, cross examine witnesses, and ensure that any decision is informed and robust, made in the full knowledge of all the facts.  Such a huge, costly and long-term development, affecting much of North West London, cannot be left to a few local councillors only a few months away from their possible demise at the May 2010 local elections.

The delay means that the ever expanding coalition of environmental groups, political parties and residents' associations will have more time to  win broad-based support for a full-fledged Public Inquiry.

More on the Brent Cross Coalition Blog
Posted by Martin Francis at 17:47:00