NO HIDING PLACE FOR LIVNI 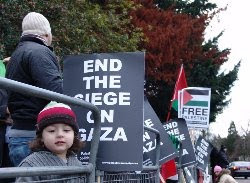 The Brent branch of the Palestine Solidarity Campaign were organisers of a demonstration by the PSC and other Palestine solidarity organisations outside the Hendon Hall Hotel in North London on Sunday. The protest was against the Jewish National Fund's decision to ask Tzipi Livni to address their Conference at the hotel. Livni is the former Foreign Minister of Israel who justified the bombing of civilians during the Gaza offensive of December 2008 and January 2009 which resulted in the deaths of 1400 Palestinians, many of them children, and injured 5,000.

The venue had been kept a secret by the organisers to prevent demonstrators disrupting the event but protestors had discovered where the meeting was to be held by last Friday. A quick mobilisation by telephone, text and internet followed.

About 100 demonstrators braved a cold Sunday morning to make their views known. In the event it turned out that Livni had cancelled her trip for fear of being arrested for war crimes. See the Guardian

The Hendon Hall Hotel had been kept in the dark about who the special guest was and the manager has reportedly since apologised for having hosted the conference and told the JNF that they are banned from using the hotel again. She sincerely regrets any upset caused and said that she was unaware of the political situation in Gaza and Tzipi Livni's role. She has apparently offered a free B&B as a prize in a raffle run by any charity supporting Palestinians.

Full report on the demonstration and pictures HERE
Posted by Martin Francis at 18:45:00