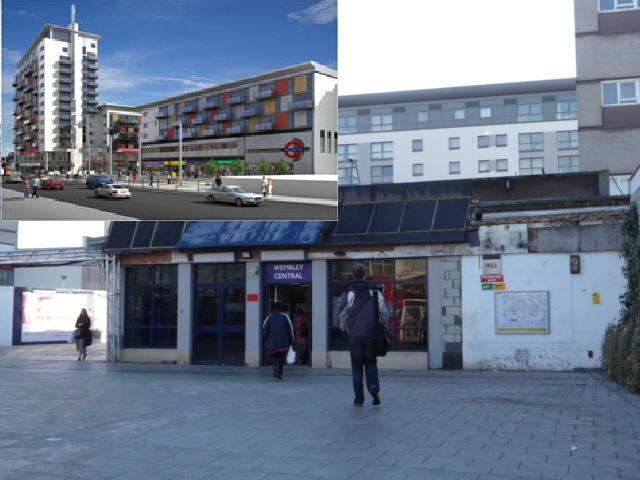 Central Square has been refurbished, new shops are opening, luxury flats are being marketed but amidst the private affluence of Wembley Central regeneration the station festers in public squalor. Just compare the architects' vision with the actual appearance of the station.  Rumour has it that money has run out and there is certainly no sign of work underway.  This seems to be the fate of much regeneration: money is poured into the profit yielding part of the development and the public service infrastructure part is deprioritised and neglected.  Hailed as a modern gateway to a new Wembley at the planning stage by Brent Council we are left with a ramshackle building which fails to come up to the standard of many an allotment shed.  What is Brent Council doing to get the work completed?


GHOST TRAINS FOR A GHASTLY STATION? 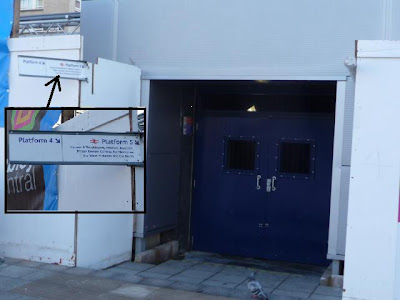 If the station building raises issues about  private-public partnerships in regeneration, the strange case of the Wembley Central 'ghost trains' exposes the absurdities of railway privatisation.

For some time Brent Council has been trying to persuade London Midland and Southern Trains to have more of their trains stopping at Wembley Central.  They think that doing this would give regeneration a fillip by making access to Wembley easier by public transport.  At present London Midland stop trains on their Euston-Milton Keynes-Northampton route on special occasions at the Stadium or Arena - the aim is to have a regular service.  This would also benefit residents who have friends and relations in places like Hemel Hempstead, Leighton Buzzard and Milton Keynes which since the 1950s have rehoused much London 'overspill' from North West London.

Southern have timetabled trains for Wembley Central but there is a catch. Travelling from Milton Keynes towards Harrow and Wealdstone, Shepherds Bush, Clapham Junction, Selhurst and East Croydon, although station destination boards list Wembley Central neither the carriage matrix route indicators  nor the automatic recorded announcements announce that the south bound service is going to stop at Wembley once passengers are on board. Just after Harrow the guard occasionally cuts  in to say the service is going to stop at Wembley, often quickly followed by the recorded voice soothingly announcing that 'The next station stop is Shepherds Bush'. All likely to cause anxiety to Wembley bound passengers who think they may be carried straight through to the Bush!

Mystified? Well so was I so I asked the staff about it.  Apparently Virgin Trains have put conditions on the route which means that apart from a couple of trains, officially south-bound trains should only pick up passengers at Wembley (not let them alight) and north-bound trains should only let them off (not let them board)!  So officially you can't do a return trip from Wembley to Milton Keynes, but you can to Shepherds Bush, Clapham Junction, Selhurst or East Croydon. I was given the impression that Virgin would be happier if no one knew about the trains at all.  The staff, sensibly, think the whole situation is barmy so stop and let passengers on and off as they would at any other station.  However, as Michael Caine might say, 'Not many people know that'.  One official said, 'Well the regulars get to know about it', and another assured me that the situation was due to change in 2012.

Meanwhile the platforms serving these trains are approached through heavy metal gates opening directly on to Wembley Square. Station staff wait at the gates in the wind, rain and snow to check tickets and lock the gates between trains.  The platforms themselves are cold, empty and windswept and I live in fear of being a bit tardy getting off the train  and finding the gates locked against me, abandoned all night with only the famous Wembley Central rats for company.  I did hear about one guard who didn't hop back on the train quickly enough after unoffically letting passengers off, who was left behind on the platform.

Meanwhile could Brent Council, the Transportation Unit, and the GLA sort this one out?  I can see no reason why the Big Bad Virgin Wolf should be depriving Brent residents of this useful and potentially very convenient public transport link.

I agree, my friend and i discoverd that the faat trains do mysteriously stop at Wembley, its so much easier to get the Southern train from Wembley direct to Harrow & Wealdstone then to get the Bakerloo Line or London Overground and stop at the intermediate stations. I hope Brent council and Virgin come to an agreement to advertise this service and make it more regular.Very few people even know about it and adverting it might make it more crouded. I didnt know that the trains arent actually supposed to let us off the train southbound!! Thats ridiculous. I also think some London Midland services shpuld stop as they are often empy leaving Euston and are 8 carriages rather than 4 of the Southern train which is filled with passengers from Shepherd's Bush.