Stephen Gash of Stop the Islamisation of Europe (SIOE)  promised 1,500 people at his anti-Islam demonstration outside the Harrow Mosque.

In fact only 15 turned up, even though numbers were augmented by English Defence League supporters, and the rather sad little group, one wearing a blond wig and another a santa hat, were corralled into a cold car park and protected by police. A couple of them made speeches to the windswept car park observed by press photographers who out-numbered them 3 to 1 - all against the background of chants from several hundred anti-Fascist demonstrators, who sometimes broke into open gales of laughter at the sheer absurdity of the lonely little band in the car park. Stephen Gash the 'leader' even managed to be late and nearly miss the event!  There is more than a touch of Captain Mainwaring about the man - without the lovability.

Given these numbers it is surely time for the local press to stop building up the group and cease publicising their baseless claims and their incitant comments.

Hundreds of anti-Fascist demonstrators made it clear that the Fascists were not welcome in Harrow and the diversity of the demonstrators once again showed that the local community were united in defence of the Harrow mosque. 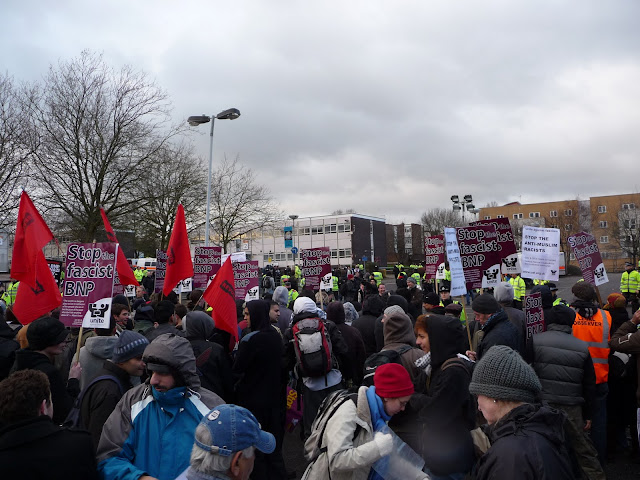 Ajmal Masroor, a spokesman for the Harrow Mosque, crossed to the corral and spoke to representatives of the SIOE and EDL and invited them into the Mosque to discuss their concerns. His invitation was turned down and Stephen Gash said he wanted to talk to the Home Office instead.  A similar invitation has earlier been issued by the group British Muslims for a Secular Democracy without success.

The SIOE has thus shown it is not really interested in dialogue or debate, but just in creating division.  In my speech to the Solidarity Vigil, as Green Party parliamentary candidate for Brent North, I pointed out that what the SIOE, EDL and BNP have in common is racism and xenophobia. Despite the SIOE's website claim that racism is 'the lowest form of stupidity' they are quite happy to get 'nod and a wink' support from the EDL. At the September 11th demonstration anti-Mosque demonstrators openly gave Nazi salutes and EDL members were present again today.

The SIOE attempt to 'soften up' an area by organising a provocative demonstration, with EDL help, and any reaction is then depicted as Muslim violence. Having caused division the BNP then move in by leafletting the area, as they did in Harrow after the September 11th demonstration, trying to build electoral support on the back of the dirty deeds of their allies. It is important that we see them as overlapping organisations with a similar agenda, and take with a pinch of salt their internicine squabbles. The SIOE may be absurd and today's demonstration comical, but the racist and Fascist nature of the groups that build on their provocations must be recognised and their activities firmly opposed.

I congratulate Brent and Harrow Unite Against Fascism for organising a highly effective, united and peaceful demonstration
Posted by Martin Francis at 17:59:00

I hope the penny has finally dropped for those SIOE members who keep claptrapping on their website.

The sheer nonsense of their rants beggars belief. They are under the impression that they have a multitude of supporters, when this demonstration points out the obvious fact that they havent.

They called for representation from lots of groups to come from all over the country, including Danes, Poles, Austrians, and Jews. When a journalist at the Jewish Chronicle saw right through the SIOE, he was accused of being a liar.

Funnily enough, in quite a lot of their postings, they keep saying that no paper or media outlet will allow them right of reply - but they have banned anyone who doesnt agree with them from posting in their forums.

SIOE, thankfully the people of the United Kingdom have a lot more intelligence than you gave them credit for. They have seen right through your grubby little group, and have sent a clear signal to you. YOU ARE NOT WELCOME IN THE UK. Only trouble is - where can we deport you to?