Malik makes it messy for Tories in Brent North 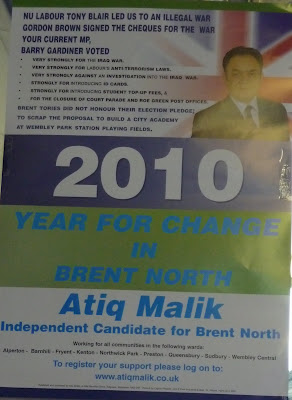 Click on image to enlarge
I did a double take when I saw this poster in a local shop - at first I thought it was something from the BNP! It turns out to be a campaign poster for Cllr Atiq Malik who was elected to Brent Council as a Conservative but after falling out with Cllr Blackman, leader of the Brent Conservative Group, formed the Brent Democratic Conservative Group with Cllr Robert Dunwell.
Malik has aroused controversy for his comments on Sharia law and women (Cllr James Powney is engaged in a spat with him on this subject at the moment), was accused of using an assumed name to praise himself as a potential parliamentary candidate for the Tories on a Conservative website, and is carrying out a bitter campaign against Barry Gardiner on expenses.
Malik has jumped in as an Independent candidate before the official Tory selection which takes place at the Pattidar Centre on March 4th. The Tories will be choosing from Madhuri Davda, Louise Hall, Tim Lines, Anjana Patel, Blaine Robin and former mayor Harshadbhai Patel. On the Conservative Home website Malik tells the party that no Tory could beat Barry Gardiner in Alperton, Wembley Central, Sudbury, Fryent and Queensbury wards. Look closely at the poster and you can see Malik lists all these wards as places where he is working for 'all communities' and throws in Barnhill, Kenton and Northwick Parek for good measure - the full set!
Elsewhere on Conservative Home he claims Tories will need a 10% swing to unseat Gardiner but doesn't discuss the impact of his own candidature. The Odds Checker website gives a clue: Labour (Barry Gardiner) is quoted at 1/3, Conservatives at 9/4, Lib Dems (James Allie) at 25/1, Malik at 40/1 and I bring up the rear at 100/1. No odds are quoted for the English Democrats (Arvind Taylor).
Posted by Martin Francis at 18:23:00