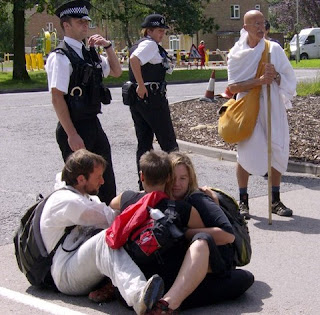 Wembley peace  and environmental justice campaigner, Daniel Viesnik, was today sentenced to 14 days imprisonment at Highbury Corner Magistrates Court.  The sentence was in relation to an unpaid fine of £50 and costs of £465 resulting from a peaceful symbolic sit-down protest outside the Atomic Weapons Establishment at Aldermaston, Berkshire in July 2007, during the Footprints for Peace International Walk towards a Nuclear-Free Future from Dublin to London.

In December Daniel had written to the Court in the following terms:


I have given the matter plenty of consideration and have thus arrived at the decision that as a matter of conscience I shall not pay the outstanding sum, either as a lump sum or by instalment. My wholly unnecessary, disproportionate and unjust prosecution, conviction and penalty for "obstructing the highway" arose from my participation in an entirely peaceful symbolic sit-down protest in opposition to what I consider to be the illegal, immoral and criminally irresponsible maintenance and development of weapons of mass murder and destruction, namely Trident nuclear warheads, and supporting infrastructure at the Aldermaston atomic death factory (also known as Atomic Weapons Establishment) in West Berkshire. The event in question took place on 27 July, 2007 as I walked nearly 900 miles from Dublin to London via Belfast and Glasgow for a nuclear-free future with an international group called Footprints for Peace. I was doing nothing more that day than peacefully carrying out my moral duty to protect humanity and life on planet Earth from the grave threat of nuclear annihilation and radiation exposure. My strength of feeling on this issue is such that I am prepared to face imprisonment rather than pay the fine, despite never having experienced prison before. I initiated a case-stated appeal to the High Court against my conviction, but eventually withdrew for reasons that do not concern this Court. In my experience the courts in general appear to be deaf to arguments of morality, conscience and common sense, especially in politically-sensitive cases such as this, with the result that true justice is often sacrificed in favour of appeasing the Establishment.
Showing his usual quiet courage and perseverance Dan maintained his dignity and respectful demeanour throughtout his appearance and addressed. the court from the dock. He was supported by about 20 sympathisers and will serve his sentence at Pentonville.

I express my admiration for Dan's principled action and his courage at a time when there is so little of either in evidence from our politicians. It is incredible that on Friday the Chilcott Inquiry failed to make Tony Blair answer for waging an illegal war, which killed thousands of innocent civilians, on a pretext of non-existent Weapons of Mass Destruction; and on Monday a peace activist was jailed for not paying a fine incurred when he demonstrated against our own Weapons of Mass Destruction.

Dan, with great respect for you constant determination, courage and resilience in exposing nuclear wrongs. For walking 900 miles round Britain in 2007 and 1,500 miles from London to Geneva in 2008 in pursuit of a nuclear-free future, your tireless, selfless energy is no crime, but an honourable path.
They should lock up Blair, not you!