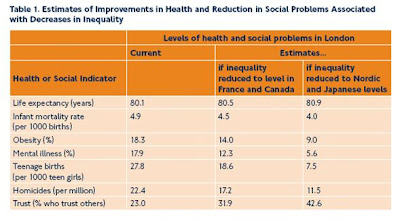 from 'The impact of income inequalities on sustainable development in London' a report for the London Sustainable Development Commission by Richard Wilkinson and Kate Pickett of the The Equalities Trust. PDF of the report HERE
A key report concludes this month that:
The full report goes into much more detail about the benefits of greater equality and is at pains to point out that the benefits would not only be for the poorer section of the population but for everyone. The table above shows the impact for London as a whole.  Elsewhere in the document figures show that with greater equality Brent would almost halve its incidence of mental illness, sharply reduce teenage pregnancies and reduce the level of obesity (currently the third highest in London).
As Brent Green Party's spokesperson on Children, Families and Schools, and a school governor, I was struck by the graph based on Unicef research that shows the UK's position on children's wellbeing/income inequality. 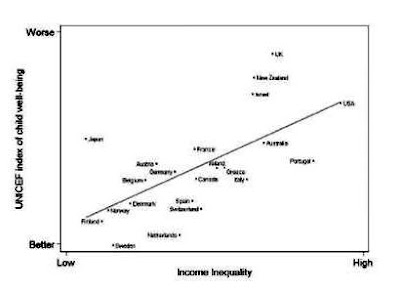 All this makes the Green Party's redistributive policies absolutely central in tackling social and climate change problems.  In creating a more equal society we will be giving ourselves important weapons to tackle issues that threaten us all.
Posted by Martin Francis at 12:48:00