Rage Against the Tube Closures

With Jubilee, Metropolitan and Bakerloo line closures again this weekend Brentonians can be forgiven for thinking that Transport for London has a vendetta against them. As fleets of buses from all over the South East park along Bridge Road to eventually transport bewildered, frustrated and angry travellers in a meandering journey along already clogged up roads, they should reflect on the reasons for this.
It is of of course the Thatcherite policy, embraced by all three main political parties, of private enterprise intervention in the public sector: Public Private Partnerships. As you sit fuming on the top deck of a 1960s Dorset double decker as it crawls along Blackbird Hill, reflect on the wisdom of Andrew Smith, Chief Secretary to the Treasury:

Partnerships between the public and private sectors are a cornerstone of this Government’s modernisation programme. They are delivering better quality public services by bringing in new investment and improved management, and are helping state-owned businesses achieve their full potential.


Tube Lines, the remaining leg of the PPP deal is responsible for the maintenance and upgrading of our underground lines. Metronet, responsible for the other two contracts, eventually went broke at the cost of an estimated £400,000,000 to the taxpayer - thinking about that should calm you down! Their responsibilities have been taken back 'in house' by TfL. Meanwhile TfL is tied into a 30 year contract with Tube Lines which means I'll be over a 100 years old before they've finished the job.

What PPP actually means is that no one is really accountable and that we as voters, and politicians themselves, can't get at them. Navin Shah AM, Sarah Teather MP, Cllr Daniel Brown lead Brent Council member for Transportation, have all protested about the closures. They have had little success except to get Metroplitan line trains stopping at Willesden Green when only the Jubilee is closed. Large and small businesses have protested about the loss of trade to no avail. Instead the work is dragging on and running a year late.

Written into the PPPcontract is a provision that Tube Lines can order line closures whenever they wish. This 'improved management' of our transport infrastructure is now in even deeper trouble because of a shortfall in the budget of £1bn for the next period. The Public Private Partnership Arbiter has had to be brought in to rule on the dispute between TfL which offered Tube Lines £4bn and Tube Lines which wanted more than £1bn on top of this. The arbiter ruled that TfL should pay £4.46bn, leaving £460,000 to be found - probably from us the fare payers. TfL is looking at possible legal remedies and has revealed that forensic accountants are probing what it described as ' massive and secretive payments to Tube Lines’ shareholders’, who are Ferrovial and Bechtel.

Meanwhile you are still stuck on the bus, smouldering.... 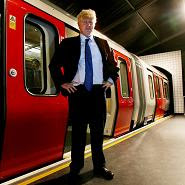 So what about Boris, can't he do something? Well he characteristically blusters away without making any impact. At the recent Harrow Question Time he described the Tube Lines structure as 'ludicrous' and 'completely mad' and in a vital response suggested that while you are sitting on the top deck of that 'replacement bus service' nothing much may be happening at all on the closed line:

'We have been asked for closures when actually they are not able to get on with sending their people down the line to put in the new signalling because the program work, the software work, still hasn't been done in Canada.'

He argues for a new system that will stop, 'What is in my view a complete rip-off by the contractors - a licence to steal, to put it no higher than that'.

All three main parties are in favour of public private partnerships despite these difficulties. Perhaps Boris should bend David Cameron's ear.  Similar stories can be told about the lack of accountability of PPPs in education (academies) which the Tories want to expand, and health (Private Finance Initiative schemes).
If you want democratically accountable public services vote Green. Meanwhile should we strike back with a 'No Fare Pay' day during the week to match every weekend closure?
Posted by Martin Francis at 11:40:00