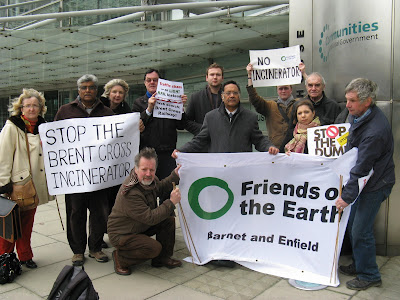 Coalition members, including Tim Storer of Brent Green Party,
outside the Departmentr before handing in petitions and letters
Yesterday the Coalition for a Sustainable Brent Cross Regeneration, supported by Navin Shah AM for Brent and Harrow and Sarah Teather MP handed in petitions and letters to John Denham, Secretary of State for Communities and Local Government, to ask him to call-in the Brent Cross Regeneration Application for a Public Inquiry.

Brent Green Party's letter requested a call-in based on the following grounds:

1. The residents of the London boroughs of Brent and Camden were not consulted on this matter despite the scheme having major impact on residents of the two boroughs. Our own council, Brent, remain opposed to this development despite suggestions to the contrary at the Barnet Planning Committee.

2. This development will have a major impact on North West London in terms of traffic, increased pollution and the destruction of local shopping areas in surrounding localities. These issues were not considered by the Barnet Planning Committee which had a Barnet-centric approach to the application. A wider assessment of the application is vital and would be provided by a Public Inquiry.

3. The application does not conform to the Government’s Climate Change Law to reduce Co2 by 80% by 2050. The scheme will generate thousands more car journeys per day and become a net contributor of greenhouse gases and global warming.

4. The lack of clarity in evidence presented at the Planning Committee on the proposed waste handling plant and incinerator. In the face of expert opinion by a visiting US professor on the potential health hazards of the proposed gasification process we believe that the Secretary of State should institute a Public Inquiry to ensure that the health and safety of the local population, and particularly that of young children who are particularly vulnerable to the impact of toxic substances, is safeguarded.

5. The major thrust of the application is to extend the Brent Cross Shopping Centre and other components of Phase One of the scheme, such as affordable housing, have been cut back. A proposal to increase the size of the Shopping Centre was rejected by a Public Inquiry in 1999 and a Judicial Review and High Court judgement in 2003. The proposal represents the developers’ second bite at the cherry in much changed and less favourable economic circumstances.

6. Although the Planning Committee is supposed to make an independent judgement, the application was compromised by the fact that the Barnet Borough Council are major supporters of the scheme and have helped facilitate the process for the applicants. Importantly they are also major landowners in the development area.
Posted by Martin Francis at 09:48:00