The Spring Election in Brent 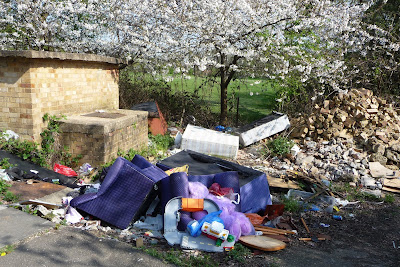 Springtime in Brent: trees in blossom, bird song and nest building....and fly-tipping
Campaigning has brought the practical importance of Green policies into focus, rather than the personality politics encouraged by the TV debates. Although there were signs of a Lib Dem bandwagon in the on the hoof comments of voters whenI leafleted outside Wembley Park stations, it became clear when they were pressed that their comments were light-hearted and with little substance.

However, extended conversations while canvassing have underlined the key issues to do with equality, jobs, housing, education and accountability. Our policy to increase the minimum wage received strong support with people saying the present wage is just not enough to live on. One claimant, feeling depressed after making numerous job applications said our policy to allow claimants to work for more hours before benefits are cut would make a real difference to him.  He said it would ease people back into a work pattern and counter the low self-esteem caused by unemployment.


Employment and training opportunities are fundamental. Our commitment to a massive investment in the creation of green training and jobs, dwarves the promises made by the Lib Dems.  We recognise the revolution that will be needed to create a low carbon economy, providing socially useful jobs. The UK must again begin making things, rather than cashing in on what has been called casino capitalism, but the things made must actually improve people's lives.  For those already in work, but having to work long hours to the detriment of family life, our policy to move towards a 35 hour week will make a significant impact - and allow work to be shared out amongst a greater number of people.

A period of recession always means that more people move into education and training to prepare for the upturn.  It is scandalous then that the College of North West London is closing its new Kilburn site and courses are under threat from funding cuts. The current management and funding system for further education is fundamentally flawed and we would return further education to the management of local authorities who are able to respond to the specific needs of local people.  As with academies there is a need to return education to local democratic control - we must reclaim our schools and colleges.

The extremes of riches and poverty in Brent North are very evident when leafleting. On one evening you can be squeezing through gas guzzlers parked on a paved over garden outside a 6 bedroomed house and on the next stepping over rubbish and climbing fire escapes to dilapidated flats over high road shops. Some of the pre-war blocks in Wembley, managed by private property companies, are in a very bad state of repair with rotting windows, damp walls and moth-eaten carpeting on communal staircases.

Our commitment to renewed direct investment in council and social housing, including refurbishment of empty properties, will begin to tackle the massive Brent housing waiting list.  Equally important will be taking enforcement action on private landlords who fail to keep their properties properly maintained. In addition we would make sure that affordable housing was built to a high specification rather than the tiny rooms provided in many current cost-cutting schemes.  I am particularly concerned that good quality and secure play facilities are provided in new developments.  Too often the promises made for improvements in infrastructure and community facilities by developers such as Quintain, responsible for Wembley 'City, ' are not fulfilled or are forgotten in the rush to develop. We would make sure that developers really deliver for the community.

Finally, we need to care much more for our communities. People all over the constituency are concerned about fly-tipping and the dumping of rubbish.  Some of this is clearly by individuals wanting to avoid the bulky collection charge but there is also dumping by cowboy builders and house clearers. The scene above is from St Davids Close on Chalkhill and Chalkhill also suffers from massive dumping of furniture and mattresses on the open ground near the Health Centre which has been ear-marked for a new public park and children's playspace. Residents on Birchen Grove pointed to a mountain of  dumped house clearance rubbish near the Welsh Harp carpark as merely the latest in a series of dumpings.  Greens would make clearining up the local environment and combating 'public squalour' a major priority.