I had a great time last week at a Question Time style hustings at Harrow College.  I was pitched against Bob Blackman, Conservative (who will resign as Conservative leader of Brent Council AFTER the election); Tony McNulty, Labour; Fred Leplatt, Respect; and Nahid Boethe (Lib Dem). There was a lively audience of 80-100 mainly first-time voters who questioned us on the economy, capitalism and climate change, Afghanistan, BNP, tuition fees and black and asian political leadership. 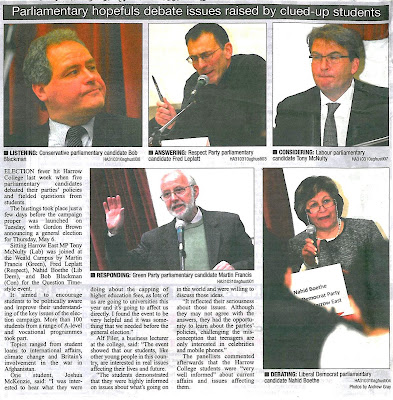