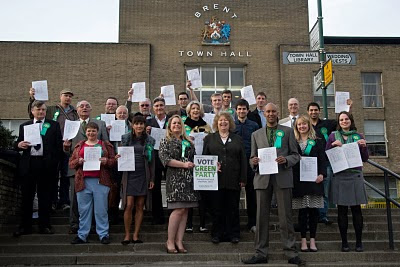 Click image to enlarge
Brent Greens are battling for council seats in the Town Hall as well as battling to save it for community use if the proposed Civic Centre goes ahead.
Increasing support for the Green's refreshingingly open and independent approach is reflected in their ability to compete for ALL seats in the Brent council elections this year with a wide field of candidates representing all walks of life in the borough. This means that every Brent voter will be able to vote Green in both the local and parliamentary election.

We will be campaigning on these main action points:
The Green's positive approach contrasted with the news that Bertha Joseph, erstwhile Labour and Conservative councillor, embroiled in controversy, is now standing as an Independent in Kensal Green and that a lone BNP candidate is standing in Fryent.
Meanwhile Bob Blackman, standing as a parliamentary Conservative candidate in Harrow East, has thrown the Tory campaign into disarray by announcing that he will not be standing for Brent council  and will  resign as leader of Brent Conservatives after the local elections.
Apart from a couple of  other independent candidates the local election is now a contest between four political parties: Green, Conservative, Liberal Democrats and Labour.  Brent Green Party are determined to make the most of this opportunity to transform Brent Council.  Please get in touch to help us with our campaign.
Posted by Martin Francis at 10:16:00