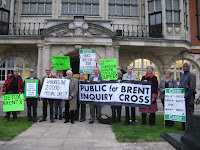 Barnet Council has been given an ultimatum of the likelihood of impending legal action by a major local company who fear the loss of their successful business to a massive waste dump.  The controversial Brent Cross Cricklewood (BXC) regeneration plans, which are fiercely opposed by thousands of local residents, politicians and campaign groups, call for the compulsory purchase and demolition of Bestway cash and carry and its replacement with a huge waste handling facility and incinerator, taking refuse from all over north London.
Bestway have discovered major flaws and inconsistencies in the plans and proposals put forward by Barnet Council and their development partners.  An official letter from the North London Waste Authority in early September stated that they no longer needed the site.  This was hastily retracted a few days later, quite likely following discussions between Barnet Council and the Waste Authority. Bestway are now challenging the whole scheme on the basis of this and other serious flaws and irregularities.  A letter from Bestway on the 8th October asks Barnet to meet with them, the developers and the North London Waste Authority as a last ditch attempt to resolve matters, since Barnet has stated that it is likely to confirm the BXC application by October 29th.  Otherwise, lengthy and costly legal action would likely follow.
Malcolm Carter, Head of Property, Bestway Holdings says, “I cannot understand why Barnet is still pursuing the Bestway site as it is patently not required any more.”
Alison Hopkins, member of the Coalition for a Sustainable Brent Cross Cricklewood Plan and Dollis Hill resident says, “Barnet Council is allowing a single unelected official to decide the future of much of North London.  This is clearly undemocratic, especially in view of the cosy relationship that seems to exist between it and the developers.  Barnet’s motive is for financial gain to cover the massive losses made by ill-advised investments in Iceland banks and huge project overruns.
“A judicial review could kill the project altogether.  This will likely cost Barnet millions of pounds better spent on services for local residents.”
The Brent Cross Cricklewood scheme has been formally opposed since last year by both Brent and Camden Councils. It was wrongly stated at Barnet's Planning Committee that Brent had withdrawn its opposition, and that brought a stinging response from Brent's Head of Planning to Barnet officials.
The Coalition has been fighting for several years the proposals for a Brent Cross incinerator, the demolition of houses with gardens, and the massive increase in road congestion.  It is now calling on Barnet Council to reconsider before it is too late.
Posted by Martin Francis at 18:56:00