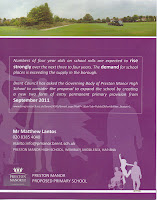 Following complaints from residents at last week's consultation meeting that they had not been written to about the proposal to expand Preston Manor High School into the primary sector, Brent Council this week circulated 4,000 letters to local people. At that meeting they had claimed they followed procedure and could not send out lots of letters.

There was a further consultation at Wembley Area Consultative Forum on Wednesday which succeeded in producing more confusion rather than clarification. Half a dozen men from Brent Council, Preston Manor High School and Watts the project managers stood at the front of the hall next to the screen as a power point presentation was made. ("How many men does it take to do a presentation?" came the whispered comment behind me.)

The presentation included the claim that there were 72 reception aged children out of school 'in the area of Preston Manor'. This was slightly different wording than the 'immediate area of Preston Manor' claimed at the previous meeting, but I pointed out that we had already been told that this meant the whole of HA9 and HAO, which clearly includes children a long way from Preston Manor. One of the presenters said that there had been confusion about whether it was an 'all-through' school or not (without mentioning that this was a confusion stemming from different descriptions in their own two consultation documents) and claimed it was not an 'all through' because the primary building was some distance from the secondary school and separated by playing fields. In fact 'all through' is a matter of whether the primary and secondary departments have one overall management structure and one governing body - not their proximity.

A question asking what the catchment area of the new new primary school would be ('catchment'  is a geographical concept which allocates particular streets to particular schools - you can find your street on Brent's website and see which school is allocated to your children) was answered by reference to the over-subscription criteria and the priority in which places would be given - not on whether the new department./school would have its own catchment area. All Brent community primary schools, with the exception of Sudbury, have their own catchment areas. If Preston Manor were to have its own catchment then those of neighbouring primary schools would have to be redrawn. However if the new primary school has Foundation status then community school catchments would not apply and the school may devise its own admisisons criteria.

In fact we were told that Preston Manor was conducting the consultation because it was a Foundation School and therefore managed its own affairs, although it was made clear that Brent Council strongly backed the proposal. Confusion was increased when Watts seemed to be addressing educational rather than building issues and speaking for the council.

Only three questions were allowed by the chair of the meeting because of the crowded agenda so 'consultation' was more about residents being 'told' rather than asked. However residents did manage to speak about their concerns about increased  traffic and in a soapbox earlier, Rose Ashton, head of nearby Chalkhill Primary School, was able to express her concerns about the impact of the expansion on her own school which has vacancies in both its nursery and reception places. This phase of the consultation ends on Monday so there is still time to get a response in. Consultation document HERE

If Preston Manor governors decide to go ahead there will be a further six week statutory consultation ending in December.
Posted by Martin Francis at 10:49:00

Shortly before the Consultative Meeting at Preston Manor High School I warned the Head and Chairman of Governors of the dangers of diverting messages addressed to the Governors to the staff who would then suppress them.This was standard practice hitherto.

They said that,no,nowadays they were more transparent.

How can I reach the victim Governors? Just a few emails will suffice. They can tell the other Governors. Some one knows these emails so tell me.

If I am totally wrong today I will beseech forgiveness tomorrow because such is my nature.

Martin, yours is a great blog today. Where relevant I will include it to addressees.

I'm a Journalism student from the University of Wetminster and I'm currently writing a story for our in-house paper on the proposed expansion of Preston Manor.

I'd also like to know how you feel about Schools such as Alperton and Copland losing funding allocated for re-development although Preston Manors expansion looks like its going ahead.

I'd greatly appreciate it if you could get to me as soon as possible, my contact details are
mfsogga@hotmail.co.uk

Thanks for your message Florence. I will send you a comment via e-mail.