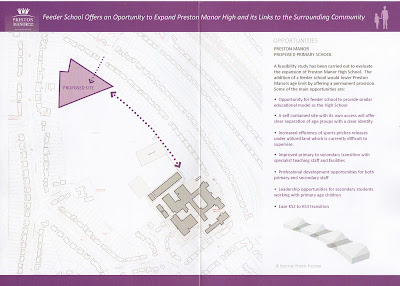 The consultation on the expansion of Preston Manor High School to incorporate primary provision got off to a controversial start at the residents consultation meeting on Wednesday.  Residents complained that householders on nearby streets had not received consultation letters and had only heard about the meeting by word of mouth. It was apparent that they did not have full information when it emerged that many thought the proposal was only for a temporary 2 classroom building on the school site, rather than a two form entry permanent building for 420 children (more if a nursery is incorporated into the plans). A Brent officer said that there was a limit to how many individual letters to householders could be sent out. Residents retorted that householders on streets adjacent to the development had not been informed.  A quick search on the Brent planning website reveals that for a minor development, such as the temporary swimming pool at Chalkhill Primary  School, which will be in place for only 15 weeks, 104 individual letters had been sent out. LINK

Residents also complained that the timing of the meeting, from 5pm-6pm, meant that the majority of residents in employment, were unable to attend so had been denied their democratic rights.

Another issue was a statement from the Authority that 'In the immediate local area of Preston Manor High School 72 Reception aged children' remain without a school place. When I sought clarity on what 'immediate area' meant I was told this was the whole of HA9 and HAO, a huge area compared with the common-sense assumption that 'immediate area' suggests the streets immediately around the school. It became clear that pupils attending the school would be coming some considerable distance, raising concerns  that traffic levels would increase at the same time as the ARK academy's gradual growth will produce additional congestion in the vicinity.  This is a copy of the Authority's map showing where reception pupils are unplaced. It is clear that there is a cluster in the Wembley Central area as well as several south of the North Circular: 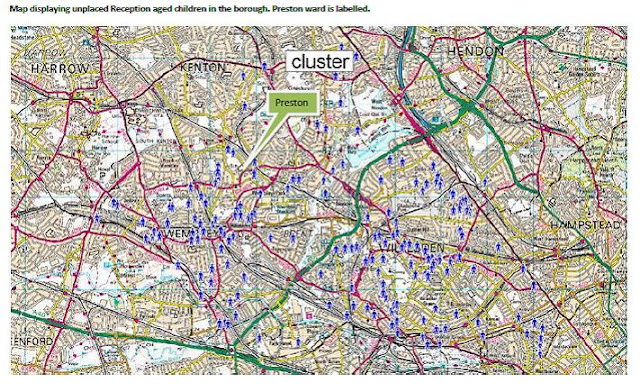 Apart from this issue of whether a new school was actually needed on the Preston Manor site, rather than elsewhere, questions were raised about why Brent Council had not anticipated the increased demand for primary provision given that these children were born 4 years ago (although obviously some were children of recently arrived families);  whether in the face of the recession some were only temporary residents who would return to their countries of origin; and the impact of the cap on housing benefits which Martin Cheesman, Brent's senior housing officer, had said would make local rents unaffordable for many families.

When I asked what plans had been made for a primary school on the Quintain development site around  Wembley Stadium, where the next phase includes the building of 1,300 new homes, I was told that Section 106 money which could be used for a new school, would only be drawn down after the housing was built. Surely this will create a further school places crisis until the new school is completed? Overall Brent's approach seems to be 'flying by the seat of our pants' when what we need is a strategic school places 'master plan'.

At the conclusion of the meeting the Chair of Preston Manor Governors said that the governors had not yet made up their minds on the expansion proposal and welcomed representations to aid their deliberations.

There was no time to discuss educational issues but hopefully there will be time to explore these at the Wembley Area Consultative Forum on Wednesday 20th October at the Patidar Centre, 22 London Road, Wembley.  The meeting starts at 7pm and the Expansion of Preston Manor Consultation is timed for 7.35. However only 30 minutes is scheduled for this item  and discussion on parking charges and Wembley Link.

Among the educational questions that need to be answered are:

1. Is the proposal for an 'all through school' as stated in the consultation document (i.e. one school, under one leadership, perhaps with separate heads of the primary and secondary departments) or a 'feeder primary school' as stated in the glossy consultation leaflet given out at Wednesday's meeting?  A feeder would be a separate school with its own headteacher.
2. What system of governance is envisaged? Separate governing bodies for the primary and secondary schools or one governing body?
2. If it is to be an 'all through' school what are the educational arguments for such a structures?
3. As the ARK Academy is already an all-through school and Capital City is applying for primary provision, is this emerging as  the de facto favoured development option of the Authority? If so an open debate is needed on the policy.
4. What repercussions would there for local primary schools of such a policy?
5. What would be the catchment area of the new school and how would this affect the catchments of neighbouring primary schools such as Preston Park and Chalkhill?
6. Would the primary school pupils receive preferential treatment for entry to the secondary school? If so this would reduce the places available to pupils from other primary schools by a quarter.
7.  As the secondary school is popular and over-subscribed, canny parents would enrol their children into the primary school in order to secure a secondary school place. What would be the knock-on impact on other local primary schools both in terms of their rolls and social make up?

Consultation document is HERE. Closing date October 25th. If the governors of Preston Manor decide to go ahead on the basis of this consultation, there will be a further 6 week statutory consultation period.
Posted by Martin Francis at 13:00:00

Apart from the initial building costs etc., what about the ongoing costs, such as teacher salaries,admin staff salaries, the list is never ending. How will these be met, when the Education budjet is surely going to be cut.