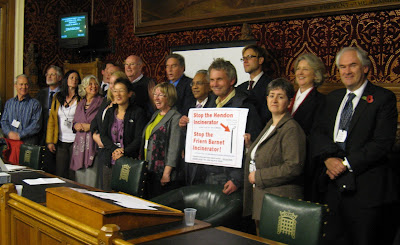 Environmental groups opposing the Brent Cross incinerator took their fight to the House of Commons on Tuesday of last week.  Together with invited MPs, they heard leading waste experts spell out the dangers of incinerators, such as that proposed at Brent Cross, and the arguments for a “zero waste” alternative.  However, Mike Freer, local MP for Finchley and Golders Green failed to attend.
Brent Cross Cricklewood Coalition members from local Friends of the Earth (FoE) groups in Brent, Barnet and Enfield were invited to the seminar “Zero Waste – the Cost Effective and Sustainable Alternative to Incineration”.  The meeting, organised by Gloucestershire against Incinerators, part of the “UK Without Incineration Network” (UKWin), was attended by anti-incinerator groups from across the UK, as well as members of Parliament.  Keynote speaker Paul Connett, Emeritus Professor of Environmental Chemistry from St Lawrence University, New York State, had previously visited the Brent Cross site, and also recently addressed the United Nations.
Professor Connett said, ““The Brent Cross Cricklewood developers need to radically rethink their "energy from domestic waste" plans.  Putting a gasifying-incinerator, emitting unregulated and toxic nano-particles, into a built-up area, near schools and homes is madness.  Gasification is an unproven technology for domestic waste.  This has caused at least one evacuation of local homes in Germany, after which trials were stopped.
"It beggars belief that the developers continue to claim they are not planning an "incinerator".
"Instead of burning our domestic waste, we need to move towards a "zero waste system", where rubbish is considered a resource to recycle.
“Incineration and gasification detract from recycling, since they don’t work without burning good recyclable materials.  They also emit more greenhouse gases than when the organic component is treated by digestion."
Viv Stein, Brent Friends of the Earth Spokesperson, said, “Incinerators are a dead technology, sold on spin.  No new plants have been approved in the United States since 1995.  The UK is now being targeted by companies keen to make a profit here – at the expense of the public purse, local communities and the environment.
“Incinerators bind local Councils to costly and inflexible long term contracts which are bad news anytime, but madness when Councils are so strapped for cash.  Councils sometimes even have to pay penalties because they are not providing enough material to burn.
“Brent Cross Developer Jonathan Joseph and former Barnet leader, now MP, Mike Freer, strongly defended incineration at Barnet planning committee, promising  information was readily available that these plants are safe.  Yet one year on we have yet to see any independent evidence this is the case.  We challenge Mike Freer and Hammerson to tell us why.  If Freer wants to stick an incinerator amongst his constituents, he should have joined us to listen to experts’ concerns.”
Phil Fletcher, Barnet and Enfield Friends of the Earth Co-ordinator said, “Far from producing “energy from waste”, incinerators are a “waste of energy”.  Electricity from burning waste is extremely inefficient.  It is actually better for the climate to landfill plastic - and not incinerate it - if it cannot be recycled.
“There is no safe level of toxic nano-particles from the incineration processes.  They are small enough to get into our bloodstream, and can do long-term damage to our health.  The ash created from incineration still has to be sent to landfill [8].  We learnt how monitoring of these toxic particles at hazardous waste landfill sites can be flawed – it depends where detection points are actually positioned.  It was quite shocking to see these are operating as open sites - here in the UK - with clouds of dust visibly affecting the local area.”
Julian Kirby, Waste Campaigner, Friends of the Earth [9] who also addressed the meeting said, “The UK buries or burns over £650 million of recyclable materials every year.  That’s not just bad for the environment, it’s a massive waste of resources and a huge cost to our cash-strapped economy.
“Over seventy thousand new jobs would be created if the UK recycled 70% of its business and Council-collected waste.  Given the Belgian region of Flanders exceeds that already, and Wales and Scotland have both set 70% as a 2025 target, why must England be left behind?
“As the latest statistics show, we are producing less waste every year, and recycling more of it.  That is the direction we need to be heading – there is no need or place for incineration in a genuinely zero waste future.”
Other speakers at the meeting were Barbara Farmer from Sward, a Gloucestershire group opposing incinerators, and Jonathan Essex from Bioregional who promote reuse of waste, which creates jobs and puts disused land into use.
This meeting follows recent news that North London Waste Authority – including Barnet - has lost its Government agreement to borrow around £700 million for its seven-borough PFI waste plan.
Posted by Martin Francis at 16:15:00