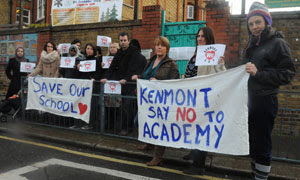 Parents at Kenmont Primary School are on their way to winning the battle to halt governors' plans to turn the school into an academy sponsored by ARK which runs the Wembley academy.  Following a vigorous campaign by parents a new strategy has been adopted by the governing body which includes recruiting a new headteacher and involving  parent governors.

One of the parent campaigners, Polly Iannaccone, said  "We were determined to defend our right to keep our school they way we want it, which is a true reflection of everything that is positive about state education, and as a fantastic example of harmonious multicultural community life in inner London. Hopefully now we have done just that."

Although Kenmont is in the borough of Hammersmith and Fulham it is close to the border with Brent and attended by many Brent children.