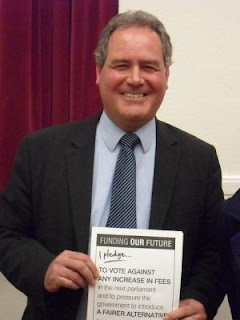 It wasn't just Sarah Teather who reneged on her election promise to oppose a rise in tuition fees. I shared a platform with Bob Blackman, former leader of Brent Conservatives, at a General Election hustings at Harrow College. He spoke against tuition fees and signed the NUS pledge.  Last night he voted for them as  MP for Harrow East and today attacked yesterday's demonstrations.

He stands exposed alongside Sarah Teather.  Both MPs have a large number of students living in their constituency and can expect retribution.

The Green Party continues to maintain its election commitment to oppose tuition fees.