COULD THIS LET THE WELSH HARP 'REST IN PEACE'? 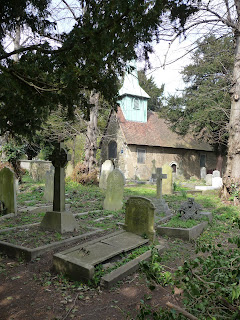 The peaceful churchyard at the 900 year old Old St Andrew's Church is only a few minutes away from the proposed housing development at the Welsh Harp.

There is a connection because it emerged this week that the site of the Birchen Grove allotments, the Welsh Harp Environmental Education Centre and the Greenhouse were areas set aside for a Kingsbury Lawn Cemetery last century. It was initially expected that the cemetery would be used for burials during the Second World War. However there were still arguments about it after the War and although a chapel was built (now an eco-energy centre near the Education Centre) alongside a shelter (still there on the Greenhouse access road) no cemetery was ever constructed.

In a paper delivered to the Nine Colloquiumon on Cemeteries at York University in 2008, entitled 'The Cemetery That Never Was', Brian Parsons said that the grounds had never been de-consecrated despite intentions to do so.

This clearly raises issues about building houses on the site. Additionally the issue of  chancel taxes, imposed by the Diocese of London arises. This is a tax raised by the Diocese for church repairs. Householders in the area close to Old St Andrew's are advised to take out a special insurance in case such a tax is levied. The land in question appears to come under the Archdeaconries of both Northolt and Hampstead.

I am advised that if the land is still consecrated this means that it is subject to 'faculty juridisction'. Any development or proposal that affects land or buildings that are under the faculty jurisdiction requires grant of faculty by the Chancellor of the Diocese following advice from the Diocesan Advisory Committee and the relevant Archdeacon. This would be in addition to any statutory planning approvals by the local authority or the Secretary of State.

This is a picture of the site in the 1930s,with  the 'new' St Andrew's in the background, which shows the extent of the area. A map in the document also indicates the land may have covered both the Brent and Barnet development sites. 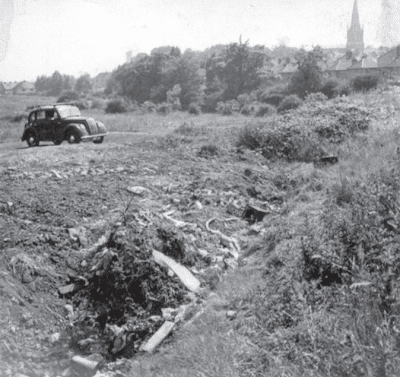 Hello,
I was just searching for pictures of St Andrew's Old Church and came across your blog. Ironically, I am investigating the possibility of putting PVs on the roof so that when it becomes an arts and heritage centre for Brent (still a way to go!) they will be able to produce some of their own energy. What do you think? Apparently English Heritage are not in favour which is a shame as we should all be moving to a low carbon economy as quickly as possible. Best wishes Katie

Good to hear from you Katie and I wish you well with your project. I imagine that there is quite a lot of bureaucracy attached to such a change of use. It has been interesting to see that the church has been back in use recently by a Romanian (I think) congregation. I presume the church will be de-consecrated before the change of use - where will the go?

On the issue of PV panels I imagine there will be strong divisions of opinion - mainly based on aesthetics rather than any disagreement on the aim of reducing carbon emissions. The ideal outcome would presumably be efficient panels which are designed to blend in with the roof. There are a lot of tall trees around the church which may reduce ambient line.

If you would like jpegs of my pics of the church please e-mail me on mafran@globalnet.co.uk