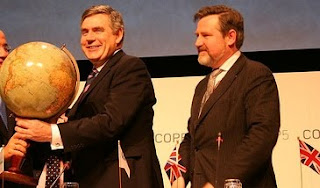 Spot the knife
The Guardian reported on Saturday that Barry Gardiner, Labour MP for Brent North, is one of several ex-ministers likely to put themselves forward for the forthcoming shadow cabinet elections.

Gardiner's ministerial career started at the Home Office and he went on the Northern Ireland, Trade and Industry and eventually DEFRA. It appeared to be a career in decline and this was confirmed by his appointment as a 'Special Envoy on Forestry' when Gordon Brown replaced Tony Blair.

Gardiner, who had always been super loyal to the Blair government, rebelled for the first time when he criticised Brown and called for his resignation LINK . The Anti-Brown faction were quickly swept into oblivion when the banking crisis sent shockwaves across the world and Brown took on the role of saving it. Gardiner left his forestry post 'by mutual consent'.

In the General Election, rather than openly oppose Brown, Gardiner ran a campaign that didn't mention Brown and  references to the Labour Party in his literature were about as prominent as the 'Printed and published by' tag. He adopted green and lilac colours rather than the usual Labour Party red and his rosettes had his smiling portrait in the centre.His  quasi-independent campaign which centred on his public profile, personality and family rather than policy, was very successful and he won the seat with an increased majority. His difficulties with expenses when he faced a constituency meeting to explain himself, pursued by a Lib Dem lunch mob and Lone Ranger Atiq Malik, appeared to have caused him little damage.

During his time as a backbencher in the last months of Brown's premiership, and again now facing the Con-Dem government, Gardiner has been active in asking parliamentary questions and contributing to debates. Helped by his TV coverage friendly seating position just behind the front benches he has established quite a high profile.

Whether this will help him in the shadow cabinet elections remains to be seen. His ultra-loyalty  to Blair means that he is contaminated by his pro-Iraq War stance and his support for Labour's assault on civil liberties. With the Labour leadership contenders distancing themselves from the Blair government and New Labour his best bet is a leadership win by David Miliband. A win by Ed Miliband would mean that even if he won a place in the shadow cabinet it would be likely to be a junior position with an early exit date. Ed Balls, a close ally of Brown, would be even less likely to give Gardiner the time of day.
Posted by Martin Francis at 11:12:00