“Compassion in politics has to transcend and override all party political allegiances.” — Paul Nicolson Source LINK 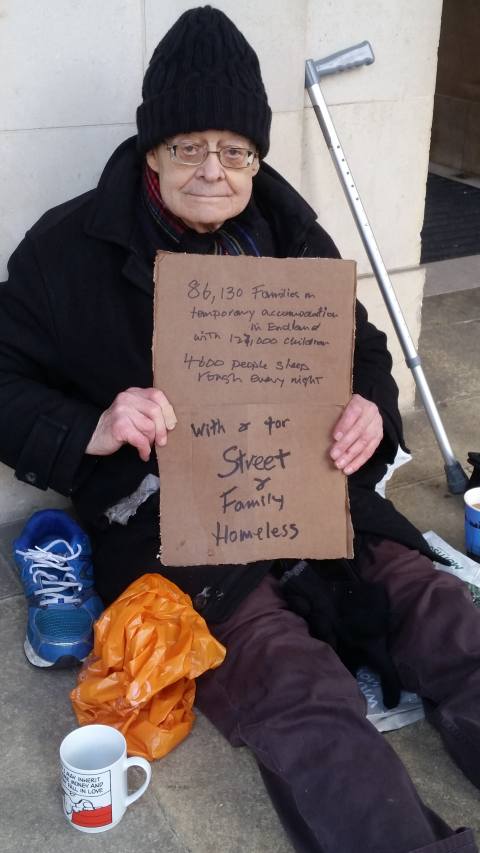 Paul Nicolson demonstrating outside Church House “in the role of a homeless person for five hours from 9am to 2pm,” 13 Feb 2020. Placard states: “86,130 families in temporary accommodation in England, with 127,000 children. “4600 people sleep rough every night.” “With & for Street & Family Homeless.”
I am grateful to Alan Wheatley formerly of Kilburn Unemployed Workers Group for this guest post

Yesterday, Thursday 13th February 2020, I was begging on the doorstep of Church House, Westminster in the role of a homeless person for five hours from 9am to 2pm. It was the last day of the February meeting of the General Synod, which is the governing body of the Church of England comprising a House of Bishops, a House of Clergy and a House of Laity all meeting together. I was supporting from the street two excellent motions to be voted on that day. One was promoting a better friendship between church members and impoverished people in line with the priority given to it by Jesus. The other was opposing the shredding of legal aid which is blocking access to justice for many Both motions were passed unanimously.

By demonstrating for the homeless I wanted to draw the attention of Synod members to the concerns I hear so often from TAP’s supporters about the Church of England’s commercial use of very valuable land in ways that do not contribute to ending homelessness.

I was wonderfully cared for by the door keepers of Church House who brought me coffee and checked I was OK from time to time. Two friends came to be with me for about an hour and another brought me lunch and hand warmers. “I did not feel the cold until after I had finished the vigil. Then my body felt chilled until it warmed up in the early hours of the next morning. Charities, shelters and cold weather policies of local authorities simply do not meet the need for or the right to a home in all weathers….” LINK

Yes, Paul was a great and compassionate listener despite being very hard of hearing. It was through such compassionate listening that he became a devout campaigner and, I’d say, “early warning system” for what has only made it to the mainstream with the pandemic of Universal Credit injustices.

A key example of that was illustrated by his sending me a Guardian Society cartoon from July 2003 in response to my 2016 reflection that saying, “Telephone calls [to the Universal Credit helpline] can cost up to 55p a minute from pay-as-you-go mobile phones, which are commonly used by people with lower incomes,” is less illuminating than saying that the call charge is £33 per hour.

Paul responded to my observation: “Dear Alan – I wrote a similar letter to Guardian Society in 2003. It was published with the following cartoon. - good wished – Paul” 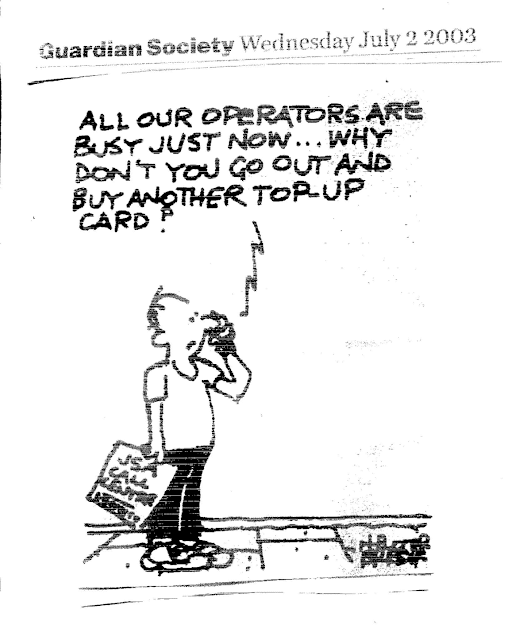 Benefits helpline message: “All our operator are busy just now… Why don’t you go out and buy another top-up card?”

I first met Paul in about February 2012 at a street demonstration outside Parliament, a few months before his 80th birthday. The backdrop to our meeting was parliamentary debate about the Welfare Reform Bill 2012, spearheaded by investment banker David Freud who had been Blair and Brown’s ‘welfare reform guru’ before accepting a life peerage on the Tory benches.

Had Paul Nicolson been recognised as a government ‘welfare reform guru’, things would have been very different than they are now. Whereas New Labour had talked about getting Incapacity Benefit claimants into jobcentres since at least as early as 2000/2001, I had been a disabled jobseeker since 1977 witnessing inadequate governmental support for disabled jobseekers.

Paul had been an anti-Poll Tax campaigner in the early 1990s while I was more intent on “slugging it out in the hope of making it instead of fighting the forces that exploited [me]” and that David Freud represents. (Social mobility quotation by Dinyar Godrej, New Internationalist, March-April 2020.) He thus set up anti-poverty charity Zacchaeus 2000 (Z2K) and attended court hearings of debtors as a McKenzie Friend and would have interacted with people not readily considered “core Green Party voters.”

The masthead text of the Z2K: Fighting Poverty website currently reads: “We believe the social security system should be a tool to help people move out of poverty and into a stable, dignified life. “We work with people in London to solve their housing and welfare issues. We campaign to change policy that is causing the most harm to our clients.” LINK

Under New Labour the public perception of benefit claimants was largely skewed by a blitz of Department for Work & Pensions (DWP) ‘Targeting Benefit Fraud’ adverts toward the manufacture of consent for harsher treatment of benefit claimants while claimants were already hard hit below the mainstream radar. Eg LINK  Whereas Z2K stands with and for poor people, Citizens Advice England now kowtows to a DWP gagging clause. LINK

That does not surprise me. On 20 January 2005 I got a phone call from prospective employer telling me that my pre-Christmas 2004 job interview had been successful, pending references and police check, but I also got a call from the DWP telling me that my Jobseekers Allowance was suspended because I had not attended my first signing-on session after the Christmas break. As I explained to the CAB worker who later handled my case, as a very long term disabled jobseeker I had experienced emotional turmoil since the 22 December 2004 job interview. I had been out of full-time waged employment for over a decade and really wanted the job. I had felt like a prisoner facing “all the joy and fear of leaving such incarceration” and the date stamp for my 14 January signing-on date had been a blur.

So the CAB worker got on the phone to DWP: “This is Elizabeth from Kentish Town CAB and I’ve got one of your claimants, a Mr Wheatley here and he’s got himself into a right mess...” leaving me feeling humiliated and deeply ashamed more than wronged by a heartless system in which I had heard of myself at the jobcentre as “an overstayer on New Deal” in 2003! (Yes, I did get my Jobseekers Allowance reinstated, but….)

Though Paul Nicolson stood down from his directorship of Z2K when he set up the more outspoken Taxpayers Against Poverty, I doubt very much that I would have got such ‘just deserts’ handling from Z2K!

When Tory Government brought in the reduction of Council Tax support for benefit claimants, Paul decided on civil disobedience, by refusing to pay his Council Tax, and being taken to court until the London Borough Haringey reinstated full Council Tax Reduction for benefit claimants. LINK His stance later helped lead to a revolution within the Labour Party in Haringey, deselecting right wing Labour councillors who would engage in ‘social cleansing’ of council housing stock to the benefit of Australian company ‘Lend Lease’. LINK

The above is just a sampling of what Paul Nicolson undertook, and this is already a long article. I shall just close here by emphasising that he had been working on the Elimination of Homelessness Bill with support from Debbie Abrahams MP (Labour) and Compassion in Politics at the time of his death, and supply the following ‘further reading’ links. And the best way that I can pay tribute to his work is for me to carry on with the benefits justice campaigning we had in common.

Thank you Alan for this perspective on a man who really did speak truth to power. Paul will be missed.

Thanks, Martin.
Did the Guardian announce this? I've seen no mention and he was such a regular contributor.

I'm not sure. I think it was over-shadowed by other events and perhaps only covered in Disability News etc.

what an amazing bloke...I would have gone there with picnic lunch if id known

Thanks for publishing this, Martin, while I'm taking an holiday from my 'News forwards' Web Log.

(I have had at least one letter published in my local Hereford Times since last posting on my own Web Log, and you did specifically ask me to write the above for Wembley Matters while I didn't specify any of the 'labels' for the above. Specifying 'labels' is something I find time consuming but also challenging.)

Proponents of 'making work pay' 'welfare reforms' love to talk about 'glass half full' / 'glass half empty' attitudes and 'lifestyle choices'. Paul was more into considering quality of life and inequalities of life expectancy among those whose choices were too often constrained by financial constraints and the 'conditionality' of Universal Credit and the like. He lived the most of his 88 year life expectancy.


Paul wrote of the Lend Lease-friendly former LB Haringey Council Leader's motivations for privatising social housing: 'It is quite simply nonsense to state that "I am equally clear that we can only transform the lives of Northumberland Park’s residents by changing the shape of Northumberland Park". Why not refurbish the council homes and stop taxing their benefits and then enforcing them with court costs and bailiffs, stop cooperating with the government's benefit sanctions. Destroying Northumberland Park will not reduce poor health, unemployment or crime it will just move them elsewhere from under her upturned nose.' Link.


Paul died as he lived: courageously challenging injustice while celebrating his privilege by doing so, while the Dinyar Godrej quotation “slugging it out in the hope of making it instead of fighting the forces that exploited [me]” translates as 'Active Labour Market Policies' of a very conditional benefits system. Link


It is also worth noting the role of Tottenham Hotspur Football Club in instigating the Lend Lease fiasco. Link

Taxpayers Against Poverty have since announced that a memorial date for Paul Nicolson has been set: "A celebration of his remarkable life will be held the day before Remembrance Sunday on Saturday 13th November 2021, at St Paul's Church, Tottenham...."

At http://taxpayersagainstpoverty.org.uk/news/interview-with-claire-glasman-winvisible-in-memory-of-paul-nicolson?mc_cid=b8dbb0b51f&mc_eid=f1734f6392 you can also read an interview with someone who knew Paul longer and more in-depth than I did.