We must not let Blair get away with murder 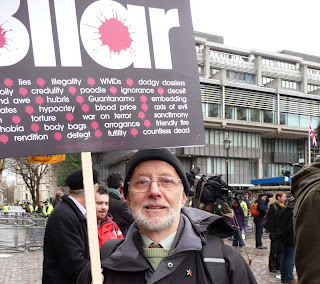 The comments on my story about the Youth Parliament show how angry, frustrated and disenchanted people feel with local politicians. At a national level the expenses scandal got massive publicity, but to my mind the public lies told by Tony Blair and his government over Iraq are of a different magnitude. The number of British soldiers killed is in the hundreds - the number of Iraqi civilians killed is in the hundreds of thousands. War crimes are more important than financial crimes.
That was the reason I went down to the demonstration outside the Chilcott Inquiry on Friday when Blair was due to testify. Interviewed by Australian TV for Channel 9, I stated baldly that the Iraq War had been illegal and that therefore Blair should be put on trial for war crimes. I predicted that he would easily manage the Inquiry Panel and would be unapologetic.  I stated my belief that his action had been predicated on staying onside with President Bush and the US at any cost.
So it turned out. The low number of people attending the demonstration, after the hundreds of thousands who marched against the war in the first place, was a big disappointment. It may be that everyone expected Blair to dance circles around a toothless panel but I fear that our failure to express massive anger about Blair's actions is a sign of our feelings of helplessness and resignation. If this is part of a wider political disengagement we leave the way clear, internationally for an attack on Iran, and nationally for the shadowy Right to exert more influence.
Earlier in the week I read an account on the front page of the local paper in Leighton Buzzard of a row about the BNP renting the local British Legion club for a meeting. A BNP spokesperson was quoted as saying that the BNP should be heard because it was the only political party opposed to the British presence in Iraq and Afghanistan. Such a stance opens up all sorts of scenarios for the General Election.
Posted by Martin Francis at 15:38:00