HAVE YOUR SAY ON CIVIC CENTRE AND ELIZABETH HOUSE REBUILD 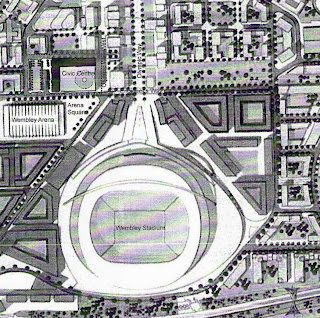 Brent Greens have previously asked searching questions about the lack of public consultation on whether the borough really requires a new Civic Centre.  The Council recently announced that they were consulting on the plans and a story in the local press and in the council's own Wembley Way told readers they could find details on www.brent.gov.uk/planning.  However this only takes one to the main portal and there is no direct link to the plans. You have to go through several menus and know the exact address or the case number to eventually get to the appropriate page.  The case number can only be found if you happen to have spotted it in the classified ads at the back of the local newspaper. Brent Greens have previously asked that important consultations should be linked from the Council's home page, or at least the planning portal.

Anyway we have decided to do the Council a favour and advertise the consultation, which officially closes on January 31st, although submissions can be made afterwards and may be taken into account if there is time to add them to papers before the Planning Committee. Follow this LINK to go to Civic Centre plans where you can also submit a response. The plans are likely to go to the Planning Committee at the end of February or mid-March. If you want to inspect the plans in details they are available at the Town Hall One Stop Shop, the Willesden Green Library and the planning department at Brent House. Case number 09/2450 and Planning Officer david.glover@brent.gov.uk

As the Council is itself the applicant in this case it is regrettable that the process has not been more accessible and the short time left to respond raises doubts about whether residents have been given a fair deal. You can't help feeling that the Council's decision to advertise for a contractor to finalise the design and build the Civic Centre withba closing date for tenders of February 10th 2010, before the Planning Committee considers the application, is jumping the gun somewhat. The Council hope to complete the building by the end of 2010. 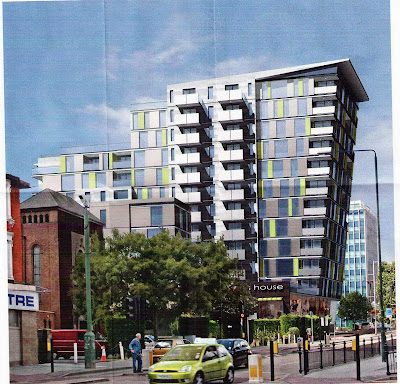 One of the benefits the Council claims for a Civic Centre is that it will make it possible to dispense with their use of other buildings and we have asked at the Wembley Area Consultative Forum what they intend to do with the redundant buildings. We didn't get a very clear reply but this artist's impression gives a clue.  It comes from the documents submitted for the demolition and replacement of Elizabeth House in Wembley High Road (the offices and flats behind the petrol station next to St Joseph's church on Wembley Triangle and backing on to the grounds of St Joseph's School). The Civic Centre would free up other buildings in the area including Chesterfield House, Brent House and Mahatmi Gandhi House.

The plan is for a 13 storey building comprising 115 flats and a ground floor commercial unit. Follow this LINK to the planning documents. It is case number 09/2506 and is due to be decided no earlier than January 28th 2010. Planning Officer avani.raven@brent.gov.uk
Posted by Martin Francis at 14:28:00