Convoy gets through - then Galloway deported 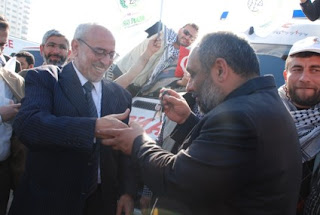 A volunteer hands over the keys to his vehicle

The Viva Palestina convoy have now handed their aid over to the Central Council of Charities - a non-governmental body of civic societies - at a ceremony in Gaza City. Convoy volunteers will now be visiting hospitals and other places where their aid will be put to use, as well as taking a tour of the devastated areas of Gaza.


Keven Ovendon, convoy leader, said "The level of support internationally for this mission has been tremendous. We`ve been understandably in a bit of a bubble - especially when we were barricaded in at the port of Al Arish. But we´ve got some sense of the scale of solidarity events and of media coverage.


"The sight of people lining the streets virtually the full length of the Gaza Strip, after waiting for 10 hours for our last vehicles to pass (thanks to further Egyptian delays) was the only vindication of that this initiative ever required.

"This was an incredibly diverse group of 518 people. Now we aim to build on that across the UK and internationally.

"Thanks to everyone who responded to the calls to action from the VP office. There are thousands of emails to respond to and we will do as soon as we can. We are now working on further plans for coordinated initiatives over the next 12 months, which will be announced shortly. "


Galloway had been trying to return to Rafah after news broke that seven of the Viva Palestina convoy members were said to be arrested. Police, who at one point were numbered at 25 mainly plain-clothes officers, refused to allow him to return.

Information from Viva Palestina website
Posted by Martin Francis at 10:52:00