A HISTORY OF STRUGGLE FOR LOCAL CHILDREN 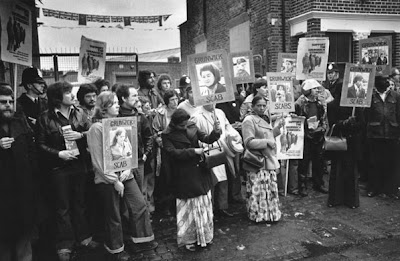 Chatting last night after a Brent Green Party meeting in Willesden, we got round to discussing the Grunwick dispute which took place round the corner at the Cobbold Road and Chapter Road Grunwick photo processing factory owned by George Ward. I described joining picket lines at 6.30 in the morning as a young teacher, before going off to do a day's teaching, often bruised as a result of the pushing contests between police and pickets.

The dispute lasted from 1976-1978 and was significant in many ways.  Firstly,  it was a dispute involving immigrant workers from East Africa, Indian and the Caribbean, that broke through into the national trade union consciousness.  It produced solidarity action from the Cricklewood Postal Workers' Union, who stopped delivering the processing mail orders, and when this was stopped by court action, other unions joined in mass pckets including miners and printers. It was also a dispute that mobilised many women trades unionists and activists: a women only mass picket met with unprecedented police violence. Immigrant workers became visible for the first time and other disputes followed, aided by the workers' experience of mobilising against colonialism.

Secondly it marked the first major intervention by the National Association For Freedom (yes it was NAFF - probably why they renamed themselves the Freedom Association, currently going large on climate change denial) on the side of bosses and against trade unions, and was in many ways a rehearsal for action against the miners during the Thatcher era.

Thirdly, it exposed weaknesses in the Labour government and the labour movement which we still suffer from today. The precarious Callaghan government was split on the dispute. Shirley Williams, a member of Apex, the strikers' union, joined the picket line, while Home Secretary, Merlyn Rees, sent in the police and the Special Patrol Group to break up the pickets.

Many Brent schools take part in Black History Month every October. They often study American Civil Rights leaders while UK studies are often about Black role models or celebrities. A study of Grunwick would reveal the strength of self-organisation and solidarity action and relate immediately to local people and the local area. In the revealing video produced by Brent Trades Council Vipin Magdahi, a member of the Strike Committee, says, "You can go to any college or school - but what we learnt in those days nobody could teach us."  Jayaben Desai, leader of the dispute, on hunger strike outside the TUC to ask for support, was asked by Len Murray, then leader of the TUC, "Who told you to do this?" (He was obsessed with the idea that the 'ultra-left' was responsible). She replied, "Nobody - it is part of our Indian tradition."  The strike failed when the wider movement decided to concentrate on fighting the Labour Government's pay restraint and social contract, but there is much children could learn from this strike which was of national significance.

There is an exhibition about the strike called 'Striking Women: Voices of South Asian Workers from Gruinwick and Gate Gourmet'  at the Women's Library, London, E1 7NT until 31st March. Images can be found on the SocietyGuardian website.  It would be wonderful if it could be exhibited at the Willesden Green Library in the future and visited by local children.

Copies of the DVD cost £10 and can be ordered through the Brent Trades Council website or by writing to Brent TUC, Willesden Trades and Labour Hall, 375 High Road Willesden NW10 2JR, enclosing a cheque for £10 payable to Brent TUC.
Posted by Martin Francis at 16:32:00

So this is what the ‘Grunwich’ slogan shouted at Shirley Williams by right-wing hecklers is all about.

I’m not trying to cause trouble, I'm just intrigued about the miners strike (I’m guessing you supported the NUM - coal not dole). Would you have supported the Miners if you knew then what you know now about AGW

I think three members of the Labour cabinet at the time were Apex members, so Williams was not alone.

The miners organised a mass picket to support the Grunwick strikers and it was a tremendously moving sight to see them marching down Chapter Road in support of mainly female immigrant workers after arriving in coachloads from Yorkshire.(Great footage in the Brent TUC DVD)

I think it did mark a turning point in trade union attitudes on race and gender. Such apparently disparate groups coming together in workers' solidarity was very threatening to rightwing Labour as well as the Tories.

Yes, as you assume, I did support the miners and we put some up in the communal house I then shared in Kingston (right next to the power station they were picketing). And No, you are not causing trouble by asking a perfectly reasonable question. I was not aware of human activity induced global warning then but we did have long discussions into the night about whether it was right to fight to keep such dirty and dangerous jobs, often centred around whether miners would encourage their children to go down the pit.

This was important because it was a matter of discussing what alternatives would be available in the longer term. In the short term it was about keeping jobs and maintaining communities and that was the basis of my support.

There is a history in the Labour movement of discussing socially useful production alternatives in the weapons industry etc and similarly we need to discuss environmentally sustainable alternatives in industries that currently cause environmental damage and threaten our health. We have to have investment in retraining and new production methods so that workers are not thrown on to the scrap heap and communities damaged. The new Green Deal could be the beginning of such a process.