Something that really upsets me is when I see yet another front garden being ripped out and paved over. There's something really brutal about it and it is  regular occurrence in Brent.  Even worse is when there is no attempt to retain even a border or a little container planting:

The London Wildlife Trust published a report last week  'London - Garden City?'which recorded the loss of gardens in London. You can download the report HERE .

'As established by this report, London’s gardens cover a vast area. But the speed and scale of their loss is alarming,’ says Mathew Frith, Deputy Chief Executive of London Wildlife Trust. ‘Collectively these losses detrimentally affect London’s wildlife and impact on our ability to cope with climate change. It’s never been more important that Londoners understand the value of our capital’s gardens. A well managed network of the city’s 3.8 million gardens support essential wildlife habitat and offer important environmental benefits in response to climate change including sustainable urban drainage.'


The loss is a combination of hard surfacing to provide car parking space - what the estate agents love to call 'off-road parking'; erection of sheds, garages, glasshouses and bottom of the garden studies etc; and the development of back gardens for new housing. Brent suffers from all these and the transformation would bewilder anyone transported to the present from the 1950's: 'What have we done with our cherished front gardens?'


It isn't just front gardens either. A parent I visited recently proudly told me she had converted the back garden into a playground for her children and took me into her back room to show me the garden,  paved completely from house to back fence,  with nothing growing in it at all. As I stared I remembered our back garden in Kingsbury when I was a kid.  We played hide and seek amongst the shrubs, picked the figs and threw them at each other,  built little camp fires to cook sausages and baked beans, searched in the irises to find snails and have snail races - and even planted seeds and nurtured the young plants. What a loss.


All is not completely lost though.  I have already reported on the Chalkhill allotments which are proving very popular but many of the very small gardens on the estate are something to wonder at. When I have leafleted on the estate I have stopped to admire the ingenious ways people have managed to grow flowers, tomatoes, corn, aubergines, runner beans and courgettes in a tiny space, often in their front gardens. Some conservation areas, such as St Andrew's in Kingsbury have managed to retain grass verges and the ban on drop kerbs. The difference is striking:


Even on the busy Church Lane it is possible to have a lovely front garden:

Action needs to be taken at a London-wide as well as a borough level. This not only requires stricter planning controls but also weaning people away from cars by providing better public transport.  It could be that the price of oil will do the trick in the longer term. There is also an issue with people's lack of time in this era of long working hours and multiple jobs and also with lack of knowledge about gardening. The former is obviously a wider social issue but it has been encouraging to see the latter addressed. Metropolitan Housing is running gardening workshops on Chalkhill, the Transition movement has been doing some educative work, and Brent Elders' Voice has introduced a scheme for cross-generational support to keep gardens under cultivation.


I do my bit to encourage wildlife in my very small back garden but is is often hard to persuade visitors that I have planted the jungle deliberately! However they are soon entranced by the many visiting birds, including woodpeckers and the busy pond life. 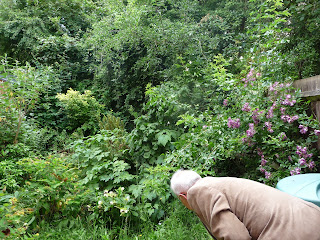