The Torch of Workers' Solidarity 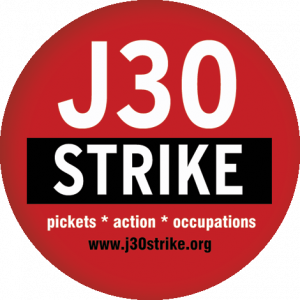 Strikers from public service unions and their supporters will be meeting at The Torch pub tomorrow morning at 9.30am for a rally before travelling to central London  The Torch is in Wembley Park opposite the Ark Academy, on the corner of Bridge Road and Forty Lane.


GPTU calls on all its members and all Green Party members to suppot the strikers of UCU, ATL,NUT and PCS in the pensions strike tomorrow. We have posted a message from Sally Hunt of UCU on the GPTU blog which explains that, contrary to media myth, public sector pensions are hardly generous. These pensions are in any case a slight compensation for the low salaries of the public sector where many workers do their work out of a sense of public service. Why should these workers pay with their pensions for a crisis of international finance?