Most primary schools in Brent will have broken up by the time that the Cabinet disucuss a report on future school places on Monday. However, the report will have implications for future stability and potential surplus of places in some schools over the next few years.   The report signals the end of the recent expansion of Brent primary schools.

I have questioned the need for a new 630 pupil Ark primary school at York House in an earlier article LINK and plans may now be affectd by the government's decisions on education spending where monies may be taken from the free school budget to supplement school budgets.

Brent policy is to have 5% surplus spaces in primary schools to aid parent choice. It is currently about 4% but likely to rise - it will not be uniform across a complex borough and some schools will experience higher surplus capacity which has budget implications as funding is per pupil. 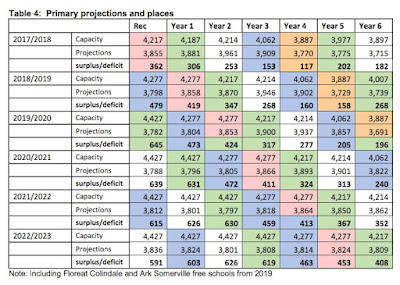 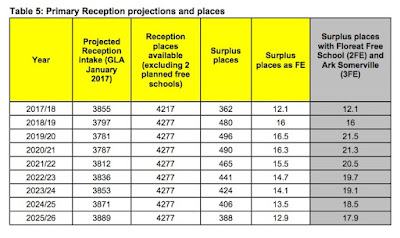 Without taking into account the new primary free schools of Ark Somerville (York House) and Floreat (Colindale)  we are looking at a surplus equivalent of more than a two form entry primary in 2018-2022. With the two free schools it is equivalent to a 3 form entry school.

The ESFA proposes to open 2 new primary free schools in Brent. The ESFA is reluctant to open new free schools on temporary sites until a permanent site has been identified. Floreat Colindale Primary, which will provide 420 places (2FE), was due to open in temporary accommodation in 2016 and move to a permanent site from 2018. However, latest plans are for the school to open in 2019 on the school’s permanent site at Oriental City. Ark Somerville Primary School  630 places (3FE) was originally approved to open in 2017 in the Alperton region of Planning Area 3. It is now earmarked for the York House site, Wembley Central which is adjacent to the other growth area in Planning Area 3. The final column of Table 5 indicates the impact these schools would have on Reception capacity if both opened in 2019.

We are forecasting a reduction in demand for Reception places for September 2017, evidenced by fewer on time applications than at the same point in time in previous years.
The latest pupil forecasts suggest that Reception cohorts will continue to fall for a further three years before beginning to increase again (in 2020/21). As a result there will be a temporary increase in spare capacity across the borough. Neighbouring authorities are reporting similar patterns.

We are currently working with schools to manage any changes in demand. Brent schools experience a high degree of pupil mobility due to families moving in and out of the Borough and families moving within the Borough. Overall forecasts indicate that year groups are expected fluctuate in size as they move through the system. There is a forecast deficit of primary places in Year 3 in Planning Area 1 and Planning Area 3 for September 2017. We anticipate that spare capacity in other planning areas will be sufficient to meet this need.

The full report including predictions of the need for two new secondary schools in the borough in the near future, can be found HERE

As Byron Court building work is due to start this Summer, surely this should be stopped and the money saved can then be used in other areas of education. The residents analysed the Councils predictions when the expansion was first put forward and we constantly said the places would not be needed. Planning over-ruled us and now we learn the expansion is surplus to requirements. It is beyond belief that this expansion, costing a fortune,disrupting a community, causing traffic chaos and greatly increasing the levels of pollution and thus affecting the health of the children and adults, is going forward.

This bears true to the fact there is little affordable housing now in Wembley, many residents are in temporary which are constantly on the move due to landlords wanting to increase their rent revenue by evicting current tenants so they can up the rent and cash in on the lack of affordable housing. Many children face uncertain futures with no reasonable expectations of stablility in their education or housing provision, and therefore this has a direct result on school places. Even when they have secured a place at school of choice, they are at the mercy of temporary housing provision who move them on a whim. We need a major overhaul of the system of allocation, and school provision within the borough. It is unbelievable that the No. 18 Bus is full of primary aged children who live in a local ward who cannot get places and are travelling + 3 miles to get their children into a school. It makes no sense whatsover. Major re-think needed.