R55’s Minavil House project in Alperton has been the subject of much debate and controversy for some time now. The tower, standing at 26 storeys, will bring a huge shift in the landscape of the area, and was described by various industry publications as the tallest building in the entire borough. This came as quite a surprise to residents both old and new, as the 2011 Alperton Masterplan adopted by Brent Council set out a vision for the area of buildings up to a maximum of 17 storeys. It would stand to reason that a building a full 9 storeys above the maximum height for the area would be a cause for debate, but Brent Council seemed uninterested in engaging with the discussion. 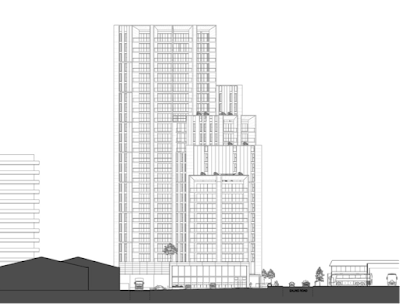 At the planning committee meeting in May, I put forward the concerns of residents in the two minute speaking time allotted to a single objector. It is of note that the council allows three minutes to the developer to put forward their case. Those concerns included the loss of light and sky to surrounding dwellings, the spurious transport impact figures used, and the fact that the building directly contravened the supporting planning document (SPD) for the area. These issues were largely disregarded in the ensuing discussion among councillors and the scheme was approved. None of the three councillors for Alperton (Cllrs Allie, Chohan and Patel) attended the meeting.

At this point I wrote a petition which over 200 residents signed, and further problems with the development were noted. In its disregard for context the project’s density runs off the charts, featuring twice the number of housing units per hectare of neighbouring schemes. A conversation with an independent transport assessor involved with another development in the ward reinforced the assertion that the transport impact figures presented at the meeting – of just two additional passengers per train at peak times – were wildly underestimating the impact of a development this size. The issues of light and sky persisted, and concerns about access and the level of parking provided remain unanswered (there are 251 homes but only 35 parking spaces, most of which are for a Lidl on the ground floor). It also emerged that the architectural justifications for the project’s height from R55’s own online publication misrepresented the scale of neighbouring buildings and created an impression of the constructed landscape rising towards the Minavil site which, in reality, does not exist. 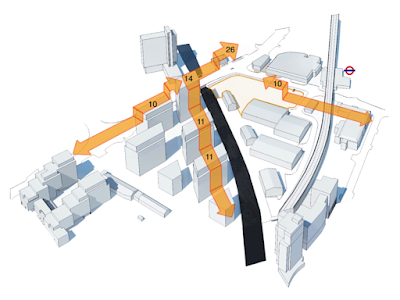 The architectural justification for the project, with the actual numbers of storeys added. It shows large leaps in height between buildings only three storeys apart, and a small step up from 14 to 26 storeys. The image also implies a rising contour between two 11 storey buildings of equal height (R55).

The petition was addressed to MP for Brent North Barry Gardiner, Mayor of London Sadiq Khan, the members of the GLA including our local assembly member Navin Shah, and the councillors for the ward of Alperton and Brent in general.

Mr Gardiner held a meeting in the wake of the Grenfell tragedy in which he addressed the issues of residents in high rise buildings. Present at the meeting were many locals, representatives of housing trusts, Brent Borough Fire Commander Mark Davis, and the Head of Planning for Brent. When pursued by Mr Gardiner on the point of whether such proposals are assessed for their fire risk, the Head of Planning admitted they are not. For a disproportionately tall building with a small footprint, on a site hemmed in by a canal, a bridge and an industrial estate, this added further grave concerns for neighbouring homes.

Though Mr Shah’s office and Mr Gardiner were responsive to the petition, the scheme was passed back from the Mayor of London to Brent for approval with no intervention. Unless the Secretary of State for Planning (Alok Sharma) decides to intervene, the building work will commence, reportedly in November. At that point the debate will inevitably turn from one about this particular site to one about the wider area, and what kind of regeneration the local population want. When commitments are made to residents to lead a regeneration area in a certain direction and then entirely forgotten at the planning committee level, questions must be asked as to whether Brent Council are representing the interests of local people or the interests of developers.
Posted by Martin Francis at 11:09:00

Residents all over the borough will be echoing Andrew Linnie's final comment:

Hear hear I so agree with Philip and Andrew Linnie. This question has so frequently been asked by local residents in the last few years.

Clearly Developers, of which many have not even come close to reading the Wembley Masterplan nor adhering to many of the expected outcomes. Oh! what a tangled web we weave
When first we practise to deceive! credit Walter Scott's Marmion

Totally agree that R55's design is excessive and unsuitable for the small site. The following link has additional resources and documents relating to the proposal: