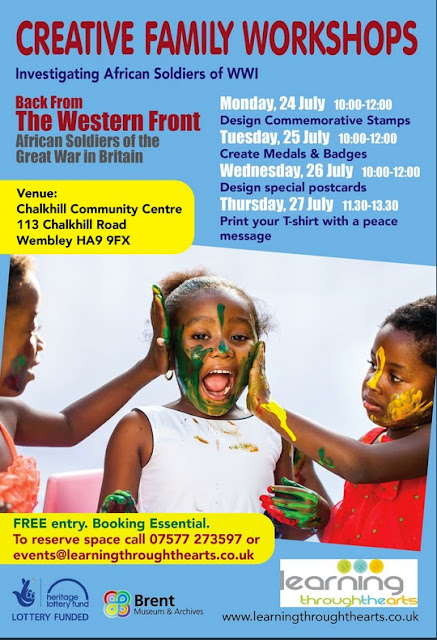 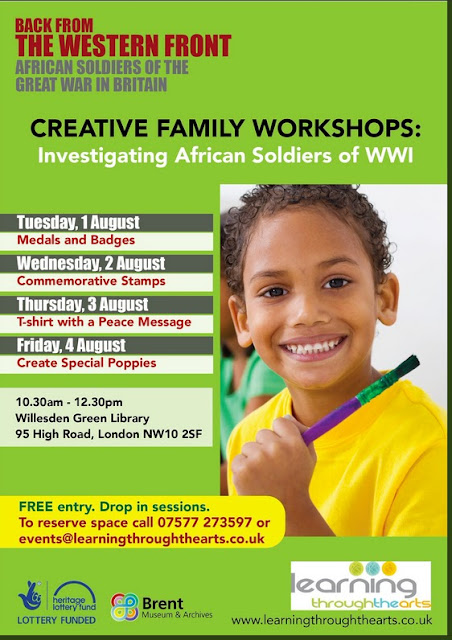 Thanks for this, Martin.

Non-whites have been largely ignored not only in relation to their conscription into WW1 but also their use as machine gun fodder before WW1. I recall that point having been made in Anthony Sampson's classic book, The Arms Bazaar, with reference to John Ellis' The Social History of the Machine Gun.

Here is an extract from a review of the latter by Checkman:

"Mr. Ellis has written a most unusual book. His thesis contends that the invention of the machine gun ,and the failure of the military to recognize it significance in the decades leading up to WWI, considering it useful only against tribesmen and other "primitives", led directly to the horrific slaughter of WWI and the static warfare of the trenches."

I am very pleased that Brent Museum and Archives have organised this project, which I believe will culminate in an exhibition later this year - watch out for that.

Three years ago, Wembley History Society had a very interesting talk about volunteers of African heritage in the RAF, which was linked to an exhibition at the RAF Museum. For anyone interested, here is part of a short article I wrote for the SCRA's "Courier" magazine in June 2014, to promote the talk at W.H.S.:-

'It comes as a shock when you discover something new about a subject which you thought you knew all about. That is what happened to me when I went to the RAF Museum a few months ago and saw their “Pilots of the Caribbean” exhibition.

When you think about our fighter pilots in the Second World War, do you picture young Englishmen, or Canadians, or Poles flying out of Northolt (the Polish War Memorial is not just the name of a roundabout in travel bulletins on the radio), all with white faces? I used to, but now I know that there were also men from Jamaica, Trinidad and British Guiana flying Spitfires and Hurricanes, as the 1943 photograph at Biggin Hill shows. [The illustration showed Jamaican pilot Flight Sgt. Vincent Bunting talking with Group Capt. “Sailor” Malan, a South African whose experiences during WW2 made him an advocate against apartheid in his home country after the war.]

It was not just white men from across the British Empire who contributed to the crews of our bombers. One of the top navigators in the Mosquito pathfinder squadrons that did such an important job for the D-Day landings seventy years ago was from the West Indies. I did not know that before my most recent visit to our fantastic local RAF Museum in Hendon.

If pilots from the Caribbean in the 1940’s was a surprise, so was the record of one of them getting his Royal Flying Corps “wings” in 1917. [This point was illustrated by the record card for Sgt. Clarke’s flying licence, issued 26 April 1917, including a photograph of the Jamaican pilot, William Robinson Clarke, who had previously been a 2nd Class Air Mechanic in the Royal Flying Corps.]'

The narrative about the contribution of African soldiers to WW1 will be explored in an exhibition at the Brent Archives see link https://www.brent.gov.uk/events-and-whats-on-calendar/events/back-from-the-western-front-african-soldiers-of-the-great-war-in-britain/

I worked as the curator on this project with heritage officer, Antonia Harland-Lang and a wonderful team of volunteers who were curious and enthusiastic to research, develop content and source images to put this exhibition together.

The process was a learning process for all of us and the resultant exhibition is an invitation to think about this untold history. There were just too many twists, turns and nuances to even dare to represent the whole story. As one of the volunteers commented "This is just the tip of the iceberg".

The importance of the Brent Archives and historians like Philip Grant is crucial to the historiography of the African contribution to WW1 because they provided content (images and articles) which inspired our decision to juxtapose the personal with the collective experience of the war. The panel about Sergeant-Major Belo Akure is a case in point. See Philip Grant’s article When Nigeria Came to Wembleyhttps://www.brent.gov.uk/media/9293973/When%20Nigeria%20came%20to%20Wembley%201924.pdf.

You will also have the chance to see the British Empire 1924 exhibition album donated by the Wembley History society.