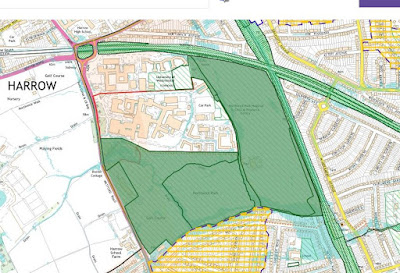 I am pleased to see that Gaynor Lyoyd is pressing home her demand for more information on the One Public Estate Plan for Northwick Park.  A year ago I called for more public information LINK

The combination of a Cabinet meeting on August 13th, a meeting held in peak holiday season and one at a time (4pm) inconvenient for people who work, would normally mean a lack of scrutiny so all credit to Gaynor Lloyd for her detailed questions. It should mean that the meeting lasts longer than its normal 45 minutes.

These are the questions:

Item 8  “Approval to enter into grant agreements for 2 Housing Infrastructure bids relating to ...Northwick Park Regeneration “ in Cabinet meeting Agenda 13 August 2018.
1  Northwick Park is a much loved local facility - a park, playing fields and sports pitches, a golf course and a Grade 1 Nature conservation site an area much used by locals for open air leisure over many years. As Brent’s policies CP17 & 18 make clear, Brent is deficient in all types of open space and - at any rate in a Sports England survey in 2005-6 - had one of the lowest levels of sports participation in England. Unsurprisingly, policy CP17 para 5.15 states that the council will protect  all open space from inappropriate development.
No plan is attached to the Report showing the extent of the (proposed) area for “Northwick Park Regeneration”. So it is not possible to see if this is restricted to the Northwick park Hospital Site allocation15.
There is  local concern about the possibility of our Park and its margins being designated a “regeneration zone”, allowing for higher density/high rise blocks - even though no-one can recall this potential allocation as having been mentioned in any general Local Plan consultation meetings.

Question 1: could a plan of the boundaries of the Northwick Park Regeneration area the subject of the grant application be published?


2  According to details on the HM Government website, to qualify for a grant being considered under this Housing Infrastructure  Marginal Viability Fund, evidence has to be given of:
a) “demonstrable market failure “ (given as per the Technical guidance in https://www.gov.uk/government/publications/housing-infrastructure-); and
b) “local support “  ( as per examples in the same paper -“extensive local consultation” );  and
c) “alignment with the Local Plan” (ditto) ; and
d) “ imminent” provision of homes

I have been trying through a FOI /EIA request to get details of the evidence or details of how the first three of these were demonstrated with the grant application. The Cabinet may like to note that the Information Commissioner is now dealing with my request  for that evidence or those details, after the Council failed to comply with a direction of the Commissioner to give me a response.
So far, only a Sudbury Court Residents Association AGM in April 2017 - at which the presence of officers was requested by the Association - is cited but the Council officers appear to have made no notes of that presentation, and is apparently asking if the Association made any.
Question 2: if these criteria are required to be satisfied for a grant application under the MVF - is the Cabinet satisfied that there is evidence/ details of the demonstration of demonstrable market failure, local support, alignment with the Local Plan and imminent provision of homes, and if so, could that evidence please be published generally and supplied to me and save the Information Commissioner’s Office time and effort?
3  The grant  application seems to be on the basis that the site is landlocked, although neither the University of Westminster nor the Hospital site is landlocked. The £9.9million grant is for infrastructure, including an access road.
By the same troubled FOIA/EIA request process, I have tried to ascertain where this access road might be. As above, my request is now with the Information Commissioner, having patiently waited since December 2017.

Question 3: please publish a simple indication of the rough alternative routes for the access road to the Northwick Park Regeneration area proposed as options in the viability studies (as these must be known for the MVF grant application) including confirming  if a route/routes  across any part of the Metropolitan Open Land (MOL) at Northwick Park is/are  under consideration.


4  Since naturally not all Cabinet members may be familiar with the precious asset to Brent that Northwick Park is - or its protective planning designations -  although I am sure they will have been properly briefed before this meeting , I am keen to know that they are aware, and that any public who may attend is aware of the position under planning.

Question 4:   does  item 8 take account of the extent of MOL and Open Space at Northwick Park, and of the other open space planning protection designations (including especially the SINC Grade 1 designation of Northwick Park and the Ducker Pool B103) - and the legal effect of  all those designations? Could the  officer please bring a copy of the Brent GIS plan showing this  with the full MOL/Open Space designations for the site (as I only have a screen shot of the same which is small scale)?