Standing up for suburbia in Heather Park Drive 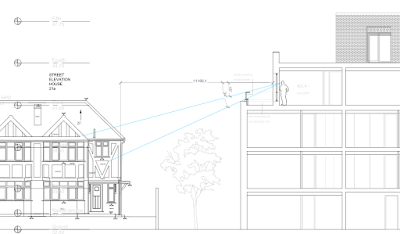 I have written before about the gradual encroachment of tall buildings on Brent's suburbia and another example is going before the next Planning Committee on August 15th. LINK

Heather Park Drive in Wembley-Alperton is suburban in character with industrial/office units on the railway sidings of the road.

Two 5 story blocks of flats (36 dwellings in all) are planned for Transputec House at 19 Heather Park Drive, HA0 1SS replacing the current 2 storey block.  The comparative size can be seen from the illustration above.

One resident (there are only two comments) writes on Brent's Planning Portal:


My main objection is to the height of the buildings which will be 5 stories instead of 2 as they are at present and will face & block out the light of the 2 storey maisonettes opposite them in Heather Park Drive. It will distort "air & light"& make ugly the essentially RESIDENTIAL street where great care was taken on the original 1930 maisonettes, including mine, to give SEPARATE own front door access to ALL dwellings incl.1st Floor (2nd Storey) maisonettes AS WELL as a small garden for each. This ensured both privacy and "green/garden like" suburban living for the Street's residents and decent space for the "flat" dwellers. I feel the developers, to maximise profit at the sacrifice of space & light for the old and new "flat" dwellers have pushed for ugly tower blocks where the new dwellers will be shoehorned into shared access boxes. The developers shd. should be limited to 2 storey maisonette high quality builds, each with own entrance from the street and a small garden in keeping with the surrounding residential buildings. This would CONTINUE down the road the 2 storey "upper & lower" maisonettes that at present end at the Transputec Car Park, i.e. 29-21 HPD embouching on to 19 HPD, Transputec Car Park & get rid of those ugly "sheds" of office buildings. Don't replace them with more "sheds" of poky flats!

A further issue is possible contamination of the land at Transputec House next to the railway sidings. LINK

Can we join together to petition the stopping of further building developments in Brent ?? Or stopping each development planned.? We need to hold collective breath ... in order to think . There are enough of us to gather together to meet Planning Committee members to make formal objections

The objectors have got a very good point.

The proposed building, even though it replaces an office block, would be detrimental to the character of their residential street. I wish them luck in opposing these plans.

Anyone objecting to this application can quote Brent Council's own core planning policy CP17:

'CP 17 - Protecting and Enhancing the Suburban Character of Brent:

THE DISTINCTIVE SUBURBAN CHARACTER OF BRENT WILL BE PROTECTED FROM INAPPROPRIATE DEVELOPMENT.

The council will bring forward DESIGN GUIDANCE THAT LIMITS DEVELOPMENT, outside of the main town centres and away from corner plots on main road frontages, WHICH WOULD ERODE THE CHARACTER OF SUBURBAN HOUSING.

Development of garden space and INFILLING OF PLOTS WITH OUT-OF-SCALE BUILDINGS THAT DO NOT RESPECT THE SETTINGS OF THE EXISTING DWELLINGS WILL NOT BE
ACCEPTABLE.'

I do not know the area well, but it would appear that the proposals for Transputec House do represent inappropriate development, which would erode the suburban housing character of Heather Park Drive, so that the Council's planners and Planning Committee should say that they are not acceptable.

A friend of mine tried to put a single story extension to the back of his house, and it would’ve had a pitched glass roof. The neighbour complained that from one position in his dining room he would be able to see the top of the roof out of the corner of his window, and on that basis the planning application was refused. I know, let’s keep everyone happy and refuse any more building anywhere.

Philip
Thank you very much indeed . Can we contact you direct for more information please if possible ? Regards . Grace Brown

I'd rather not get directly involved in any specific planning applications, thank you, but the information on Brent's "Core Strategy" Planning Policies is available on the planning pages on the Council's website.

Unfortunately, as can be seen from a number of cases reported on "Wembley Matters" in recent years, Brent's planners and Planning Committee seem to find ways of bending, or even ignoring, their own "rules", which are meant to govern how planning applications are decided. [This is not just a Brent problem - ever since the Government introduced its National Planning Policy Framework in 2011, there has been a presumption in favour of development, and Councils are afraid that if they turn down applications the developers will appeal against their refusal decision, and probably win!]

If there is a specific question that you think I may be able to help with, and you can't find the answer on Brent's website, please send an email to Martin (address under "Guest Blogs" on the right) and ask him to forward it to me.

Good luck with your objections to this application.