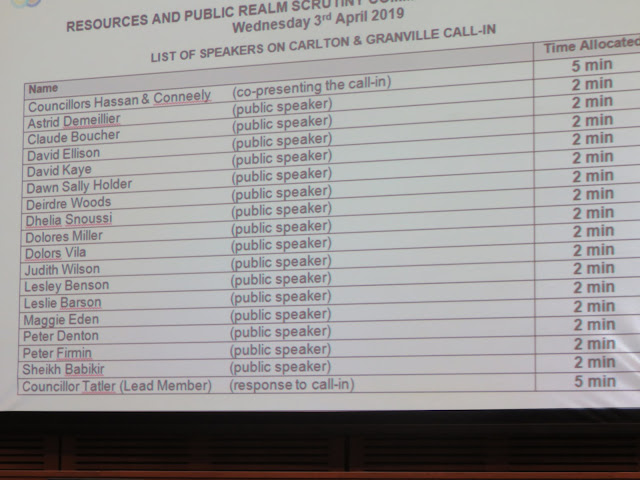 There were a record 15 speakers at tonight's call-in of the redevelopment proposals for the Carlton-Granville site in South Kilburn.

Kilburn councillors Faduma Hassan and Rita Conneely presented the reasons why they and fellow councillors had called-in the Cabinet decision. 13 of the 15 public speakers said why they opposed the Cabinet's plans.

After very thorough questioning the Committee agreed to refer the decision back to the Cabinet with a number of issues to be addressed before the project goes ahead. These included:

Most of the speakers favoured the option that would have built no housing on the site with community space, which has already been cut back by structural changes, to be increased instead. They refuted suggestions that this meant they were against providing housing for needy groups - they felt that there was sufficient space elsewhere on council owned land in the massive development to build council homes. One speaker claimed that the council was giving land to developers without ensuring social/council housing was built as part of the deal. They pressed the need for community space on an estate where the population was rapidly increasing through development and where many local projects provided essential services to needy residents to the benefit of the Council.

The referral back to Cabinet will not win abandonment of  the plan for housing on the site. Only two members of the Committee voted against the reference back. Cllr Saqib Butt backed the Cabinet and the Tory, Cllr Kansagra, made a rather confused contribution which I interpreted as being for the Cabinet but judge for yourself by viewing towards the end of the video.

Although Cllr Neal Nerva said there was no hurry to reach a decision Carolyn Downs pointed out that Brent Council needed to safeguard the £65m they had been promised by the GLA. Cllr Tatler (Lead Member for Regeneration) argued that the new nursery build and other aspects of the project including the community hub needed to be built by the end of the year.


When Cllr Tatler stated that the new centre would have more community space than currently, campaigners pointed out that Carlton Granville had already had community space taken away through the 'big hole' made in the Grand Hall for enterprise space. Dee Woods made a passionate plea for the architectural  and social heritage of the site.


Cllr Mashari said that councillors had to take the issue seriously when so many long-established and much respected local organisations were protesting. She pointed to the earlier issue when Granville Carlton proposals had been mismanaged by Brent's property team's 'bad decision' alienating local people and how she had tried to set up a stakeholders' group to win back confidence. She was perturbed that the Council still did not appear to be  ensuring that 'property and community must go hand in hand.'

Questions were raised about the South Kilburn Trust who it was claimed was not representative of the community, had no democratic structure, excluded local councillors and in some cases, including the HS2 vent, had acted against the interests of residents. Cllr Tatler argued that governance was not part of the call-in but Mashari, her predecessor in the post, argued that the Cabinet paper had argued the proposals were being 'community led' so it was a valid consideration.

There was confusion over the 23 proposed housing  units and whether they would be social or council housing (different rents) and  the Committee established that this was an 'aspiration' and subject to viability studies and might even involve private housing.

There was concern that the project co-siting a community centre and housing would have inbuilt conflict between the full use of the community centre with late opening for events and the needs of young families with babies needing to sleep. Adequate soundproofing would be essential and may be so expensive as to affect viability.

Re the coexistence of housing a social facilities, possibly including amplified sound/music, with careful design and a willingness to spend money there need not be any noise problems, for so long as the social facilities are contained within the building. The problems would arise when people are arriving and leaving, or if there are social events taking place outside.

However if there were to be housing and its design were to be entrusted to a private developer, it is unlikely that the developer would be willing to invest in the kind of careful design that would be required - unless this is a particular type of developer, perhaps small-scale and locally based, with a strong vocation for doing environmentally responsible developments.

Much of the opposition to having housing on the site may be due to a fundamental (and understandable) mistrust of developers.

On housing, it is interesting that today's "Brent & Kilburn Times" report on the Scrutiny Committee meeting includes the following:

'Cllr Neil Nerva said there were not enough "family sized" homes in the plan, but chief exec Carolyn Downs said bigger ones were not financially viable.'

There are hundreds, probably thousands, of families in Brent who urgently need "family sized" Council, or other social / affordable, homes. Brent's own planning policies set out reasonable targets for what proportion of homes in any new development should be three or four bedroom family homes.

Yet whenever private developers are involved, Brent always seems to allow them to get away with providing far fewer "family sized" (and "affordable") homes than they should. The excuse given is that their schemes would otherwise not be viable.

Why are homes that are much-needed by local families being sacrificed by our Council, in order to allow developers to make bigger profits? There needs to be a better balance between the interests of the public, and those of company bosses and their shareholders.

To be fair my recall is that Carolyn Downs' statement was not quite as bald as that. I will need to check my notes but I think she said that if the flats were were large-family sized there would be fewer flats overall which is obvious. She went on to say that with capped rents this would mean lower rent income for the Council if they were council homes. Perhaps that amounts to the same thing...