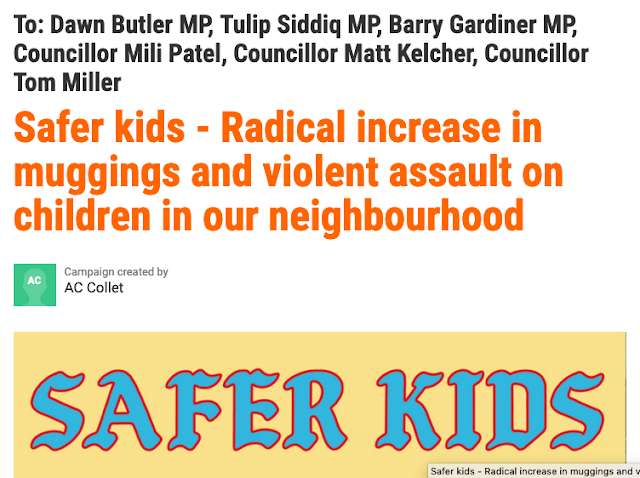 We demand immediate solutions to the daily threat our children face through:

We also demand long-term solutions such as investment in local youth centres and helping the youth committing these crimes to become part of the community, rather than fighting against it.

We the undersigned residents of Brent demand our streets be made safe for our children. We are writing to you to demand you immediately address the radical increase in muggings and assaults on children in our local area. Lawlessness is rampant and impunity is now rife in our neighbourhood. Our streets feel like the Wild West - anything goes, and no one can do a thing about it.

Muggings and assaults on children are now occurring daily, often between 2pm and 7pm on the peripheries of schools, in parks and around the Chamberlayne Rd area. These crimes are committed by youth, at times in balaclavas, often using knives, sometimes using steel bars as a threat, other times using direct violent assault - and all this in broad daylight.

In the cases where adults have tried to intervene, they too have been violently assaulted. One parent was recently punched in the head in Roundwood Park numerous times in front of his son, and another parent had a plank of wood smashed into his face, loosing several teeth in the Queens Park area - also in front of his children.

Sadly, many cases go unreported as the victims are fearful if they tell, they could be putting themselves in more danger. Moreover, parents at times fear nothing will be done as the police rarely turn up, or if they do it’s 30 minutes late, when the perpetrators are long gone.

At an age when our children should be cherishing a newfound independence, they now have to fear for their safety. They must ask themselves: Will I be attacked on the way home from school today? Is it safe to take my phone? Do I have to walk in a big group to be safe? What should I do if I get assaulted? Will they knife me?
No child should have to ask him or herself these questions. We want our children to:

- be able to walk to school and home from it
- go the the park/skatepark
- walk to a friend’s house
- go to the corner shop
- catch a bus/ the tube etc...
without having to worry that they will be assaulted or mugged.

The effect of daily fear in these young minds, if not addressed, is likely to lead to a dramatic increase in anxiety, depression and isolation in our local community.

May we remind you, in 1991 the UK signed the Convention on the Rights of the Child, one of the nine core UN human rights treaties. The CRC protects the rights of children in all areas of their life, including their rights to “freedom from violence, abuse and neglect”.

It is tragic that almost three decades later, in this supposedly civilised society, our children are not protected from violence or abuse in their very own neighbourhood.

It is tragic, that due to austerity, our society is now one in which crime is rampant, impunity rife and our children - our future - are the ones having to suffer the devastating consequences.

It is tragic that they must now live in fear in their own community.

We demand you make our streets safe for our children. We demand action and we demand it now.

Yours sincerely,
AC Collet on behalf of Safer Kids

WE HAVE ASKED FOR A LIST OF SUCCESSFUL BRENT PUBLIC FUNDING BIDS FOR COMMUNITY GRANTS. But having big problems getting the data. Can anyone help? How do we find out how our money is being spent?