Recent polling by Ipsos conducted across 14 countries globally shows that 66% of Britons believe that in the long-term Climate Change is as serious a crisis as COVID-19, this compares to 71% on average across those 14 countries.

Respondents from China were the most likely to believe that in the long-term Climate Change is as serious a crisis as COVID-19 at 87%, while respondents from the USA and Australia are the least likely, but still well over half at 59% agreeing. 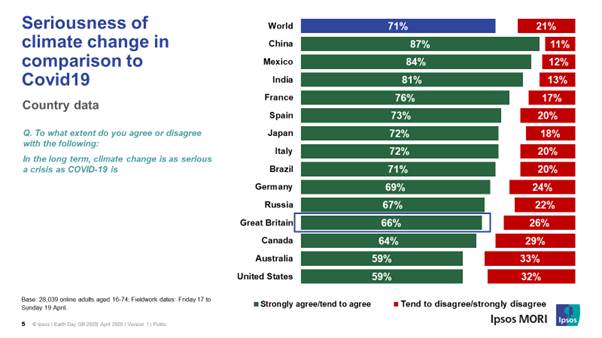 Globally 65% agreed that it is important that climate change is prioritised in the economic recovery after Coronavirus. In Britain, however, this is lower at only 58%. 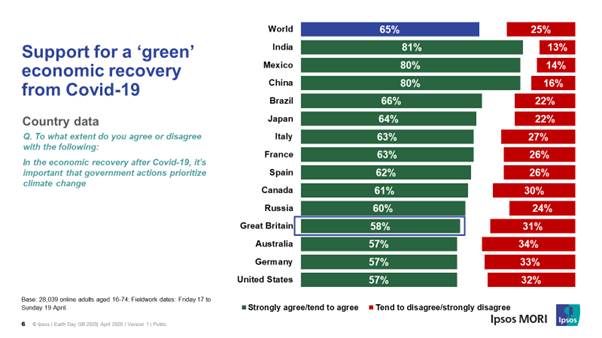 The polling also shows that both the world and Britain are split on whether or not the government should take actions which might harm the environment to help the economy recover. Globally 44% are in favour and 48% disagree, with Britons split 46% agreeing and 43% disagreeing, meaning we edge slightly to believing that the government should help the economy recover even if that’s at the potential expense of the environment. 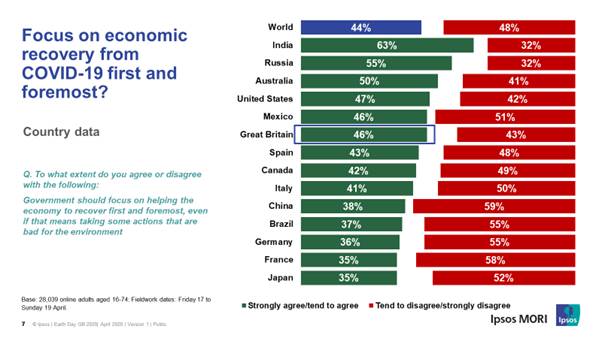 It is clear that while we deal with the Coronavirus crisis, Britons are still concerned with the environmental issues facing the world and the country. And whilst a majority say they want the environment prioritised in the economic recovery, people in Britain are divided (almost equally) on whether or not the government should take actions which might harm the environment to help the economy recover.