The second of a series of guest posts by Wembley History Society member, Philip Grant.

Welcome to Part 2 of this weekly journey through the story of our local country park. If you missed Part 1, you can read it here. 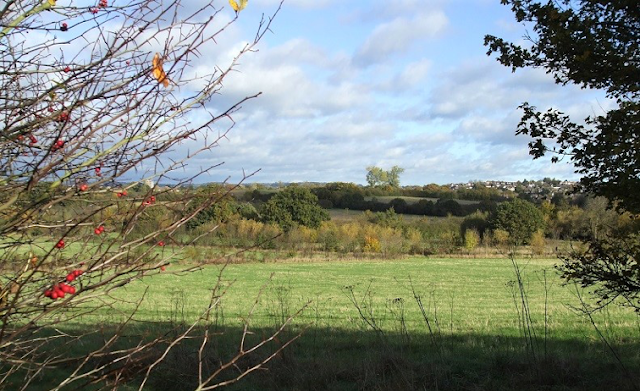 1. An autumn view across the fields to Gotfords Hill, with Kingsbury beyond.

We had reached the late 16th century, and the map of Kingsbury made for All Souls College in 1597. The extract below marks Hill Farm, on Salmon Street, and shows the trackway separating Harrow from Kingsbury near the top, Kingsbury Road winding its way down the righthand side, and Church Lane (with “Fryarne f. Howse”, or Fryent Farm) at the bottom. You can see the fields as they were at that time, edged green for meadows and brown for ploughed fields where the farmers grew crops, as well as the wooded areas. 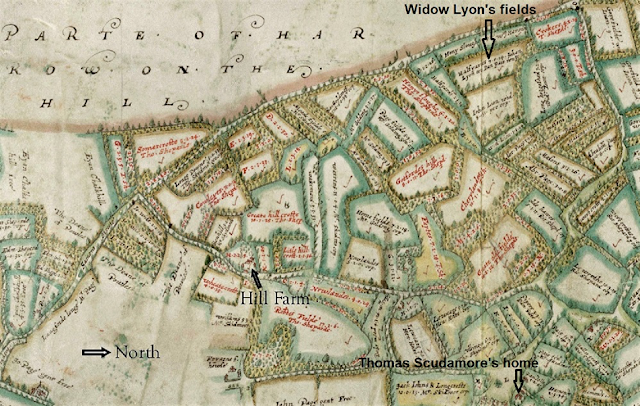 2. Part of the 1597 Hovenden Map of Kingsbury.  (© The Warden and Fellows of All Souls College, Oxford)

A number of scattered fields on the map show “Mr Skidmore” as the tenant. Thomas Scudamore, who lived at Kingsbury Green, was another interesting character remembered at Old St Andrew’s Church. [Click on the link to discover more about its fascinating history.]

“Wid. Lion” was the tenant of a group of fields at the top right corner of the map. John Lyon of Preston was a wealthy farmer who had died in 1592, leaving money in trust for the maintenance of local roads, and to provide free grammar schooling for boys in Harrow. The school has become famous, as he allowed the trustees to charge fees, to educate “foreigners” from outside the parish. He had land in Harrow, including on Preston Eastfield, as well as 116 acres in Kingsbury, which his widow, Joan, continued to farm until her death in 1608.

On the Harrow side of Eldestrete in the 1590s, there were troubled times at Uxendon Manor Farm, the home of the Bellamy family. They had remained Roman Catholics, despite this branch of Christianity being outlawed in England under Queen Elizabeth I. Some members of the family had already been fined, imprisoned or executed for hiding Catholic priests  before Robert Southwell was arrested in their house in 1592. Richard Bellamy and his family spent time in prison, and the cost of the fines meant them giving up Uxendon Manor to the Page family. 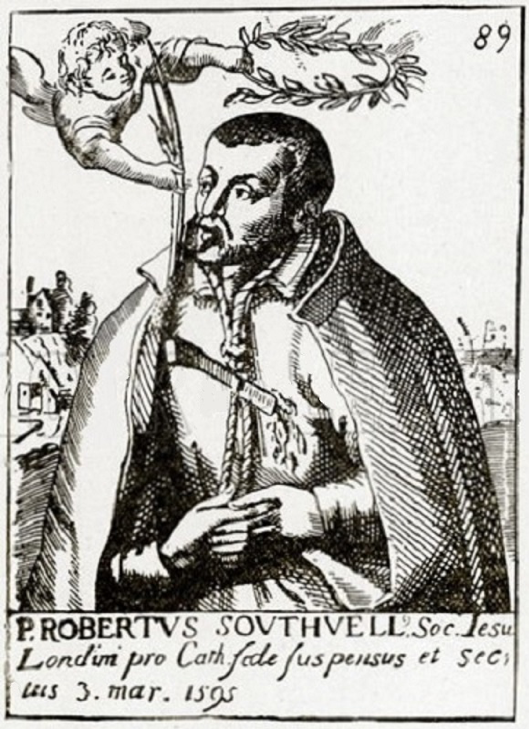 
Southwell’s fate was worse. He was held in the Tower of London for three years, and tortured to try and force a confession for plotting against the Queen, before he was executed for treason, simply for being a Catholic priest. Who would have imagined then, that four centuries later he would have been declared a saint, with a school named after him on the other side of what would become Fryent Country Park?

Richard Page of Uxendon also found himself in the middle of conflict in the 1640s. He was an officer in the Royalist army during the English Civil War, and was knighted by King Charles I after his efforts at the second Battle of Newbury in 1644. After the King was executed, Sir Richard went into exile, and was married at The Hague in 1651, where the future Charles II had his court at the time. After the Restoration, Uxendon Manor remained in the Page family.

We have details of the farms in Kingsbury around 1730, from a document produced for the Duke of Chandos, which is now in the London Metropolitan Archives. Chandos was a politician and landowner, who had made a fortune from the public offices he held, and spent huge amounts on his home at Canons in Stanmore. He held some tenancies, under another of his titles, Lord Carnarvon, and may have been looking for the chance to add more!

Lord Carnarvon had an interest in a house and orchard, probably Bush Farm house. The unnamed adjoining farm of 47 acres is listed as a separate letting to Elizabeth Sarsbury, for ’21 years from Lady day 1722’. 34 acres of this were meadow, comprising Great Oldfield (‘with a barn in itt’), Little Oldfield, Great and Little Faytes, Great Cherrylands and Honey Slough. Two other fields, Little Cherrylands and Gaffers (Gotfords) Hill, totalling 13 acres, are described as ‘arrable’. 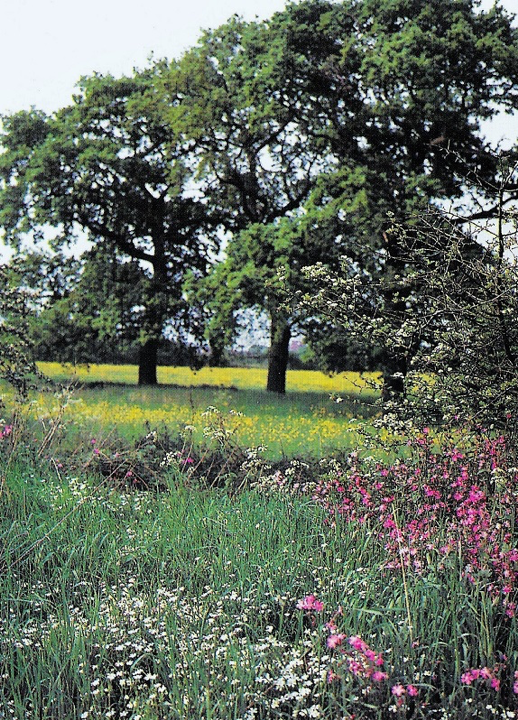 4. Looking across Faytes and Cherrylands fields. (A Barn Hill Conservation Group postcard from the 1980s)

In and around the fields of this small farm were 19 acres of hedges and woods, including ‘one parcel almost round Honey Slough – 3 acres, 3 roods and 22 perchs’ (almost four acres). This was part of 55 acres of woodland in Kingsbury let separately to John Haley, the tenant of Hill Farm. His large farm had 107 acres of fields, 79 acres of meadow and 28 acres of ploughed land, in addition to the house, barnyard, garden and orchards.

The agricultural revolution of the late 18th century saw the invention of new farm machinery. Kingsbury’s heavy clay soil was not suitable for these modern arable methods, and even more of the fields became pasture land. Most of these meadows were used for growing hay. Long grass was cut in the summer, then dried and stored in large stacks, for sale as animal feed throughout the year. London, the rapidly growing capital only a few miles away, was home to thousands of horses, both for riding and for pulling carriages and carts. Kingsbury’s farmers sent their wagons up to the Hay Market, near Piccadilly, with food for the city’s horses, and came back with loads of dung from the stables to fertilise their fields. 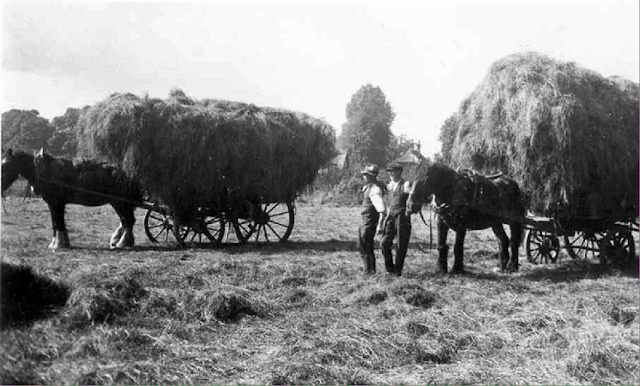 Hay continued to be the main farming crop in Kingsbury well into the twentieth century, as the photograph above shows. But that is jumping forward - I will take up our country park’s story, from the late 1700s, next weekend. As before, if you want to ask any questions, or add some information, please leave a comment below.


LINKS TO OTHER ARTICLES IN THIS SERIES