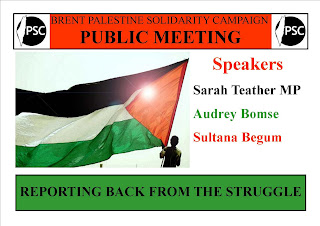 Monday's meeting on Palestine could well have been an occasion for hyperbole and ranting after recent events in Gaza, but instead was impressive, sober, passionate and educational.
Sarah Teather who was in Gaza last week with a parliamentary delegation showed a film of her trip which gave ample evidence of the huge amount of damage done by the Israeli attacks, not least the destruction of schools, hospitals and mosques. Her accounts from families showed the intimate, personal affect on ordinary people. Sarah told the story of a family whose home and possessions had been destroyed. The young son held on to a football, his remaining possession, for dear life. Sarah equipped only with the usual parliamentary gifts described the helplessness she felt when she left the boy sitting amidst the ruins holding on to a tin of House of Commons biscuits, the only thing she had to offer the family. Sarah stressed how important it was to support MPs making a stand on the issue and said that the wave of public pressure on MPs had contributed to David Miliband eventually coming out and saying that the Israeli action had been 'disproportionate'.
Audrey Bomse, from the National Lawyers Guild, who was on the second Free Gaza boat, said that as a child of holocaust survivors she had no hesitation in likening the situation to the Warsaw Ghetto. She said Israel had the ability and technology to target accurately so that the killing of civilians that took place was either deliberate or the result of indiscriminate firing. She said that however illegal the rockets fired at Israel may have been, there was no justification for the collective punishment of the Gazan population. She described the various possible legal remedies via different international courts and said Israel was already bracing itself for such action, describing them as 'legal terrorism'. She finished by saying the people of Gaza need medicines, they need food but most of all they need friends.
Sultana Begum, who spent seven months as a Human Rights Observer for a World Council of Churches programme described the work she had undertaken in Hebron on the West Bank. This included escorting Palestinian children at the Cordorba School who faced attacks from settler children on the way to school. 69 different check points in the inner city area created huge problems for routine movement of Palestinians who lived under military law while 400 settlers, subject only to civilian law, were protected by up to 2,000 soldiers. She described brave non-violent action by Palestinians to try and get access to the agricultural land on which they depended for sustenance. She told stories of ordinary families and the immense struggle they faced to maintain daily existence.
A Gazan from the audience said that it was important that there should be long-term. continuous support, not just rage that flares and dies out, leaving the situation as before.
There will be a lobby of MPs to take action in support of Palestine on March 11th at the House of Commons. Brent PSC will be lobbying Sarah Teather (Brent East), Dawn Butler (Brent South) and Barry Gardiner (Brent North). For more information and to write to your MP click here or e-mail brentpsc@hotmail.com
Brent PSC is on Facebook
Posted by Martin Francis at 21:46:00

Hmm it appears likie your site ate my first comment (it was extremely long) so I guess I'lljust sum
iit up whjat I submitted and say, I'm thoroughly enjoying your blog.

I too am an aspiring blog writer but I'm still new to the whole thing.
Do you have any tips for novicee blog writers? I'd really appreciate it.


Here is my site SEO Portreath