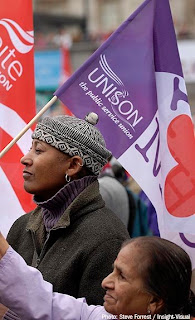 The Campaign to Defend Brent's Health Services was set up originally to bring together health service workers, patients and trade unionists in opposition to the massive cuts in Brent's community health services made by the Primary Care Trust in response to their 2007 financial crisis. Now the NW London Hospitals Trust have announced that they need to make "saving", i.e. cuts, of £32 million. Although they say that they hope to make these savings without compulsory redundancies, they admit that up to 400 jobs will be lost, and campaigners are convinced that such job losses are bound to impact on patient care and lead to greater stress for the workers who keep their jobs. People's health deteriorates in times of economic recession like the one we face now, so we need more and better health services, not cutbacks.

Supporters of the Campaign gathered outside Central Middlesex Hospital on Valentine's Day, Saturday 14th February, to declare "We love our NHS". This was one of many protests across London and the country as a whole called by Keep Our NHS Public declaring support for the ideals of the NHS and opposition to cuts and privatisation. The campaign will be organising more events and activities as the effects of the cutbacks become clearer.

If you are interested in joining the Campaign to Defend Brent's Health Services, you can email Sarah Cox, the coordinator, on roundwood@redmail.com or ring 07951 084 101