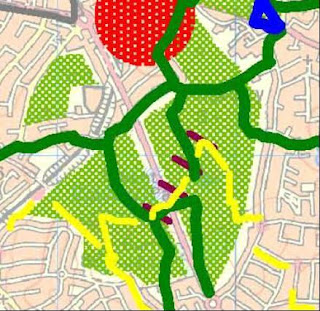 Sustrans is currently consulting on possible cycle routes for the North West London Greenways. Part of their proposals concern routes around Wembley.

Illustrated (in green) are possible routes in Fryent Country Park. Fryent Way is the road running from left to right down the centre of the map and the Jubilee line can also be seen. This would mean the construction of tarmac paths over meadows and grass paths.

Although, as a 'Greenie' and a member of the London Cycling Campaign I support the construction of more cycle routes and the promotion of cycling for commuting, exercise and leisure, I have reservations about these proposals because of their impact on the unique environment of the Park which includes woodland, hay meadows, wetland and many ponds. As well as being a certified organic farm the Park is also a haven for wildlife and has remained relatively unspoilt for many years. It is one of the last remaining examples of Middlesex countryside. I am also concerned that the cycle paths will disturb the peace and tranquility of the Park and will reduce the pleasure of visitors, including those primary school children who accompany me on nature walks there as part of my work with Brent School Without Walls.

Barn Hill Conservation Group, which is a voluntary organisation that helps maintain the Country Park is also concerned about the impact of the cycle paths. They are proposing that the pavements either side of Fryent Way, which are currently under-used and in poor repair, should be upgraded for use by cyclists instead. Their are also proposals for other parks and roads in Brent which can be seen on the Sustrans consultation website.

The consultation, which has received little publicity in Brent and has not been discussed in Area Forums, ends on March 6th, 2009. For documentation and to fill in a questionaire go to:
http://www.sustrans.org.uk/

I think the Sustrans cycle network for London is a terrific idea but the proposals for Fryent Park look a little unappealing. The East to West link keeps well to the North edge of the Park and should be largely unobtrusive, but the North to South linkage seems to suffer from over-kill.

But I'm not very taken by the idea of cycle-ways on each side of Fryent Way: fast cars and lorries 'roaring' past does not for relaxed and happy cycling make!

A key question for Sustrans to answer is just how important is their proposed North South link through the park to their network. Where will it take people travelling North?

But overall I think, generally speaking, the use of off-road cycle routes is pretty compatible with semi-wild areas. There's no chance that the operators of the Tour de France will be applying for the Fryent Park route when they next come to England.

The area is not just 'semi-wild', much of it is a nature reserve. The meadows at the foot of Barn Hill are often water-logged in the late Autumn, winter and early Spring and are home to migrating amphibians - likely to get squashed by passing bikes. The conditions of the ground will mean that path construction willbe more complex, requiring solid foundations.

I too am a cyclist and a fan of Sustrans but think that in this case preservation of the country park and nature reserve outweighs the interests of cyclists who could be catered for in a less obtrusive way. Cycle parking facilities along Fryent Way would enable cyclists to take a break and explore the park on foot.