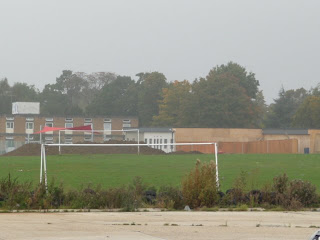 The reasons for the continued postponement of the Brent Planning Committee date to consider the planning application for the proposed permanent academy on the Wembley Park Sports Ground is now clear. The Greater London Authority (GLA) has stated in their Stage 1 planning report that, “the application does not comply with the London Plan”. (Report attached) The Report gives Brent Council a long list of areas where they need to revise, review and carry out more research as to the impact of the proposed academy.

A wide range of well thought out and detailed objections have been sent to Brent Planning Department and many have also been copied to the London Mayor. It is not surprising that the Mayor’s officers are concerned about this ill thought out proposal. They question whether this is the right site for such a project, something that WPAG and Brent teachers have been saying for years.

There is also the question as to whether the academy is really necessary. Brent’s own figures on school places showed in November (report attached) that there were 205 spare reception places in the borough, 8 at the temporary ARK academy which was supposedly over subscribed! That number is now down to 100 empty places. A Brent spokeswoman claimed that “the vacancies are so scattered it disproves the idea that places are not needed.” She obviously didn’t look at her figures properly as there were, for example, 19 and 20 spare reception places in schools close to the temporary ARK school. These figures show clearly that it has undermined the local authority primary schools already and was not needed. It was a costly and cynical attempt to bolster the claim that the permanent application had to receive approval.

If the permanent academy goes ahead, then it is clear that it will also undermine the local secondaries. There are sites elsewhere including in the South of the borough. There is still time to look at these and build a secondary school at one of these places.

The academy programme itself has yet again shown itself to be making little or no difference to children’s achievement. Nearly a quarter of ‘failing’ secondary schools in London are academies! It is the first years of any new project when you would expect the best results but, despite the millions poured into them, academies have not achieved what the Government promised. The most recent Price Waterhouse Coopers report concluded that there is “insufficient evidence to make a definitive judgment about the Academies as a model for school improvement”.

It is the state comprehensives that are doing best in the value added stakes. In Brent the ordinary state comprehensives’ A* to C’s results increased by approximately twice the average of those in the Capital City Academy (See Brent’s results for last year and this year). The teachers in the Academy are adding value, but are hamstrung by the ridiculous and counterproductive system of private control.

We are faced with the unbelievable situation when the Government are nationalising the banks while privatising the education system. Campaigners against the Wembley Academy will keep up their pressure and stop this ill thought out scheme.