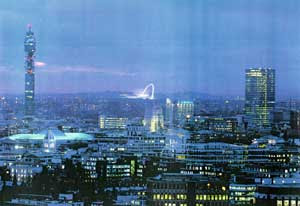 The Council's Wembley Masterplan completely underestimates the present financial crisis and recession and assumes that everything will be 'back to normal' in the short-term, according to Brent Green Party.

They call for the plans on be put on hold until the Council have completed an analysis of the likely impact on the borough of a long-term recession and the subsequent restructuring of the local economy. This should include a green economics approach that would create a low-carbon economic sector in the area based on developing green technologies, providing local jobs at a time of rising unemployment.

Despite evidence of a down-turn in retail and the building industry, the non-availability of mortgages, the over-supply of office space locally, and existing Wembley hotels operating at under-capacity, the Masterplan depends on the development of more retail outlets, up-market flats, office space and hotels. It relies on developers supplying Section 106 money for projects such as the rejoining of North End Road to Bridge Road, a swimming pool and the Wembley Live! project despite Quintain Estates, Brent's main developer partner, stating that the Masterplan is 'unrealistic, undeliverable and unaffordable'. Their fall-back position of relying on cash from central government or the Mayor's office is similarly unrealistic in the current dire economic situation.

The Greens support the Government Office for London's demand that Brent provide 'strong and convincing evidence on realism and deliverability of the Masterplan's aspirations'. They also support the Wembley Community Association's call for urgent, realistic short-term action in the area rather than grand long-term schemes.

Brent Green Party strongly supports the Masterplan's approach to improving the area through tree planting, the naturalisation of the Wealdstone Brook and provision of a variety of green spaces. They call for the provision of a variety of children's play areas including spaces for team games, bike and roller blade courses, fixed play equipment and areas for adventurous and exploratory play. They oppose the rejoining of North End Road to Bridge Road to create through traffic flow in the area as this will encourage cars in the area and be detrimental to the quality of life of North End Road residents.
Posted by Martin Francis at 11:24:00