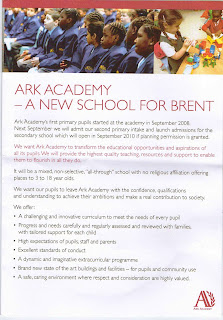 "Cor! You must be really desperate!" I couldn't help exclaiming when I saw the shivering figure armed with glossy brochures in the entrance hall of Wembley ASDA today. She was vainly attempting to get busy shoppers to apply for a place at the Wembley ARK Academy - just down the road from the store.

This year the Academy failed to fill all its Reception places and there were vacancies in other local schools. Applications for admission in September 2009 close on Friday. Perhaps ARK is failing to persuade parents to send their children to a school which consists of temporary huts in the middle of a building site. It would be fun if all the infant and primary schools in Brent set up a stall in ASDA - there would be no room for shoppers!

The brochure states that ARK will launch the admissions process in September for the first secondary cohort due to start in September 2010 'if planning permission is granted'. This is an important caveat as Brent Council is still waiting for revised documents that it commissioned following the GLA's rejection of the Stage 1 Planning Application for the permanent academy. The revised traffic report will be crucial and the council will be re-opening consultation only when all the documentation is complete. This adds up to a significant delay for a process that was supposed to be completed earlier this year. The earliest possible date for the application to go to committee now looks like March 24th but it it more likely to be April.

Meanwhile shoppers at ASDA should be wary of adding a pig in a poke to their shopping trolley.