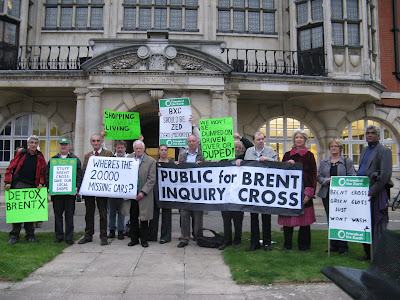 Darren Johnson, Green Party chair of the London Assembly, has joined the Coalition for a Sustainable Brent Cross:

"I strongly support the call of the Coalition for a Sustainable Brent Cross for the rejection of the £5bn Brent Cross/Cricklewood development application to Barnet Council. The proposed development would have a major impact on traffic and pollution across the whole of North West London, particularly the neighbouring boroughs of Brent and Camden. Barnet Council is not qualified to take decisions that impact significantly beyond the borough's boundaries and the London Mayor must make it his business to intervene."

Navin Shah, Labour Assembly member for Brent and Harrow added his voice to the swelling opposition:

“Barnet Council’s deferral follows months of delays and dithering that doesn’t bode well for the application. The Brent Cross application has already been delayed for the past year, and the problems that have dogged it appear to continue to do so.”

“The large number of objections is illustrative of serious problems with this huge application. Thousands of northwest London residents and objections from neighbouring Brent and Camden Councils show this application is seriously flawed in terms of major issues including affordable housing, traffic generation and its complete disregard for sustainability.”

“Given the sheer size of the application, it is vital Barnet gets this redevelopment right. The delays show they know the objections are serious and well merited. I urge the Council to do all it can to avoid all too obvious, and costly mistakes by demanding more from this flawed and unambitious planning application that will currently do more damage than good."
Posted by Martin Francis at 10:37:00

You may like to read - and contribute to - the "brent cross" and "NWLLR" pages on Wikipedia.