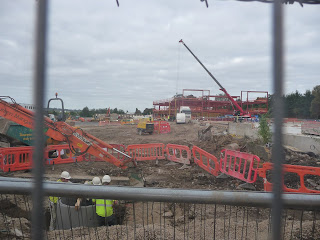 As the Wembley Park playing fields disappear beneath the ARK Academy building works there have been a number of developments on the academies front. The government has announced that private sponsors will no longer have to cough up £2m towards the cost of new academies and it turns out not many did so anyway. The government apparently believe this will squash claims that academies are a form of privatisation rather than create claims that our schools will now be given away to private companies. Giving away schools will no doubt mean that all sorts of strange private sponsors will emerge but the government promises a stringent procedure to vet them - let's wait and see.

The underlying assumption that private organisations, by their very nature, will be better at running schools has been challenged by the fate of Sheffield Park Academy. This Academy, run by United Learning Trust, took over from Walthe School which in 2004 was making 'satisfactory progress'according to Ofsted. Walthe was rebuilt at a cost of£8m in 1998 but in 2006 was replaced by the Academy which moved into new buildings costing £90m last year. The latest Ofsted inspection report on the Academy rates it as 'inadequate' in all categories and criticises its leadership and management -precisely the area which is supposed to give private sponsorship the edge. ULT is the largest academy sponsor with 17 schools.

To add to the confusion, arch-Tory Westminster City council has commissioned a report by Professor David Eastwood which recommends that local councils should have the power to take over failing academies. The commission warned that academies were refusing to cooperate with boroughs on developing coherent local plans for schools. The Evening Standard said that councillors feel 'politically vulnerable' because voters see them as responsible for education, despite them having no control over academies.'

The sooner the academies are brought back under the democratically accountable control of local authorities the better. Perhaps this could become an issue in the May 2010 local election so that the new school being built in Wembley Park belongs to us, the taxpayers and community charge payers, rather than a hedge fund millionaire.