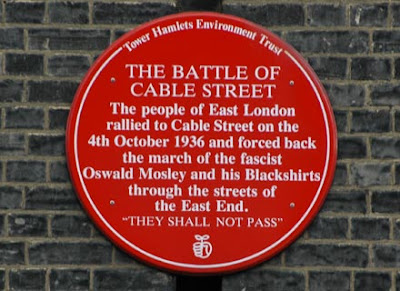 Ken Livingstone, chair of Unite Against Fascism and former mayor of London, spoke out yesterday against the anti-Muslim rally called by far right organisations outside Harrow Central Mosque this Friday. Livingstone said:

"If anyone were to call a demonstration outside a synagogue or church, this would rightly provoke a national outcry. There should be exactly the same response from the government, politicians, all religious faiths and the media to the call for a demonstration outside a mosque. The only possible meaning of this event is a protest against Muslims and Islam – a religion followed by more than a billion people in the world."

People should wake up to the fact the protests outside mosques are taking us back to the fascism of the 1930s when fascist thugs marched against Jews and their places of worship. This demonstration should be condemned and banned on the grounds of blatant religious discrimination and a threat to public order."
Posted by Martin Francis at 11:17:00

Thank You..
And if you have Facebook, please join the group Stand Up For Islam, it is not a group to create hatred just a group to raise awareness.